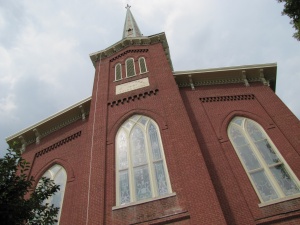 Time for a childhood dream to come true!
I can remember asking my father, time and again, to take me up in the steeple of the St. Jacob Lutheran Church in Miamisburg. This wasn't a one-time request but something I repeated over and over. It's also something I never got to do and Dad is now too old. But sometimes dream do come true, only later.
A note from Dan Poffenberger, a former Miamisburg High School grad with me (1967), made the offer. Pick a time, I'll take you up, he said. Today was that day. 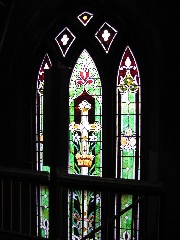 Hard to believe these windows go back to the 19th century. There is history in every turn. 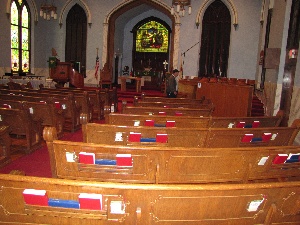 Begun in 1861, the church was dedicated in 1864. Notable dates were a Good Friday service in 1865, the date of Abraham Lincoln's assassination. Then, the Easter Sunday service two days later. Just finished with the Civil War, the people must have knelt in these pews and wondered if the carnage would ever end. 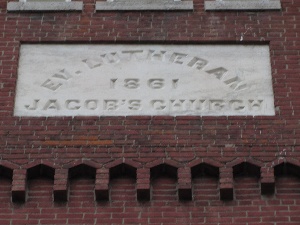 This plaque is above the font door of the church, noting the 1861 genesis of the building. 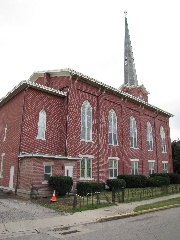 An exterior view of the building (from the rear, facing southeast), shows the steeple in the front. In my opinion, this is Miamisburg's crowning glory. 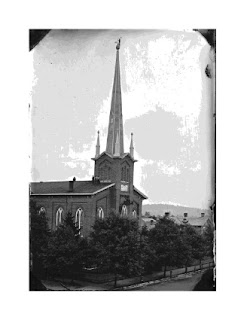 Have a look at this shot! Taken in the 1890's (they think) and stored in the church, a glass plate negative was found with this image upon it. Yes, there's a man standing atop the steeple! Imagine holding on up there, fifteen stories above the ground! 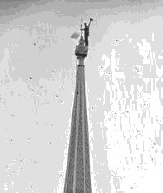 Don't believe it? Here's a view of just the top of the steeple cropped for greater resolution. 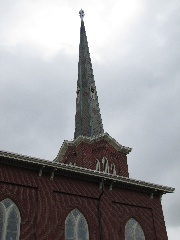 So here's one of the early openings as we moved upward through the steeple. Dan stuck his head through and told me to go on (he's had a hip replaced). 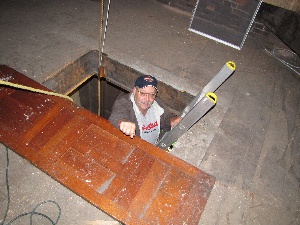 While still in the bricked section above the main part of the church is an old bell, first cast in 1839 (below). It was made at the John T. Miller foundry in Miamisburg. According to church historian, Kim Izor, "When first cast. the bell was not successful because a flaw marred the tone."
Silver was suggested as a way to improve the sound and so church members collected "silver spoons, candlestick holders, tea sets, silver coins and jewelry." The bell was recast into a "high treble bell." 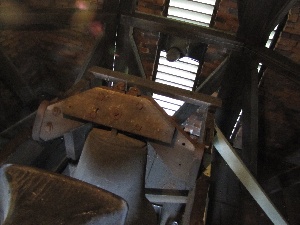 And here's a shot with flash added: 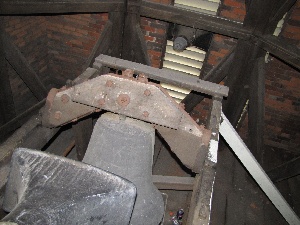 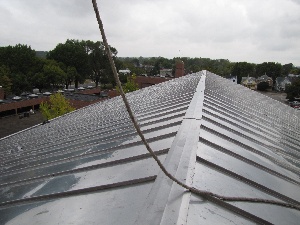 Through a louvered window, this is the view looking north. The Miamisburg Civic Center can be seen on the left. The rope which passes in front of the window is probably due to renovation work being done on the steeple. It was leaking. 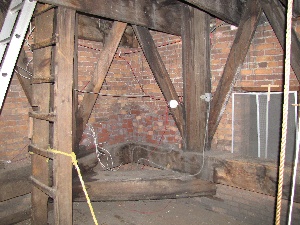 Still in the section with bricks contracted for in 1862, the wood superstructure extends above. The entire steeple tops out at 150 feet, the highest building in Miamisburg. How many bricks does it take to build a church? This one took 336,000. They cost $5 per 1000. 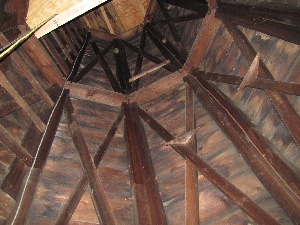 This is as high as I got as the ladders ran out! It is now an all-wood structure and becomes narrow quickly. Who knows where I actually was? I believe I had passed the set of louvers on the steeple itself so there's no doubt I was quite high. 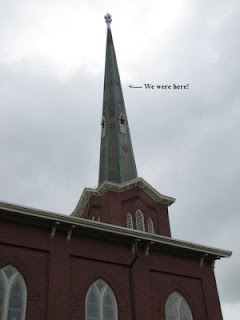 And so a dream is realized! That's one to check off the bucket list.

Note: the story continues here.
Posted by Bill at 10:27 AM