The picture below was taken about 9:30 p.m. on July 26, 2009, as the combined International Space Station (ISS) and the Shuttle passed over Farmersville. In this reduced shot, you can see the streak left by the ISS during a 10 second time exposure. 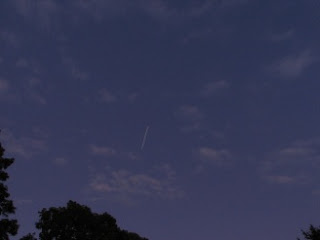 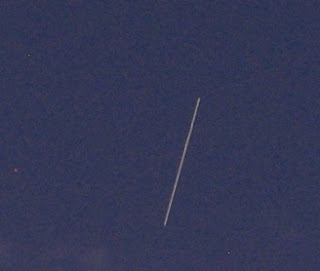 I walked into the back yard at about 9:15 p.m. so I'd have time to let my eyes adjust to the darkness (it was hardly yet dark). As I was setting my camera up on the tripod, I saw that the sky was busy with bats. Two of them fluttered by so closely that I could hear their wings beat. I waved my hands a few times so they could "see" me and most of them moved higher and off to the side.
The ISS pass was perhaps the brightest I have ever seen. It's peak magnitude was -3.2. Venus, by comparison, is about -4.1. The object passed so quickly when it was overhead that I had trouble keeping it in the frame. Thus the picture I've posted was taken as the ISS was lower in the sky and moving apparently slower.
What a beautiful night to watch science at work.
Posted by Bill at 10:58 AM

How about something red, white and blue for the 4th of July? Well, the version I had for lunch was minus the blue but the addition of a few blueberries - or raspberries - would complete the recipe in Independence Day fashion.
This is a modified recipe for Glazed Strawberry Pie and it is as wonderful as it is easy! 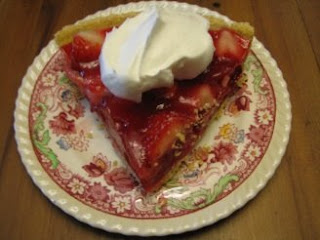 Combine water, sugar, cornstarch and salt. Cook until the white color clears and the mixture becomes gel-like. Stir entire package of Jello into the hot mixture. Cool in refrigerator until it begins to thicken. Place strawberries in pie shell (we left some whole but cut a few for enhanced flavor). Pour glaze over berries and place in refrigerator.

Other fruit (peaches, raspberries) would work as well. Change the flavor of Jello to match.

Add a dollop of whipped cream and you have the red and white. Plop a few raspberries or blueberries atop the whipped cream if you want to add the blue.
Posted by Bill at 3:38 PM