It was right out of the wild west. Only the distant mountains were missing.
The sun sank ever lower in the sky and that bright orange of the western deserts lit the sky. 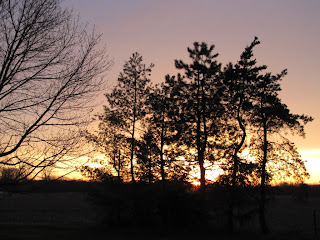 When I first looked out the window, the sky was already glowing brightly. Till I walked to the back of our property, the sun was sitting on the horizon  ready to drop out of sight  These are the minutes when sunset unfolds quickly, the sky changing by the minute. 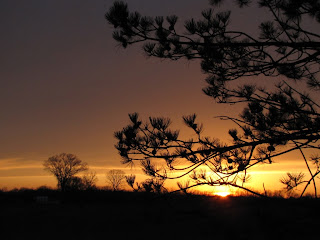 But a single minute has passed and the sun has deepened by many shade, from a brilliant orange to a muddy, yellow-brown sienna. 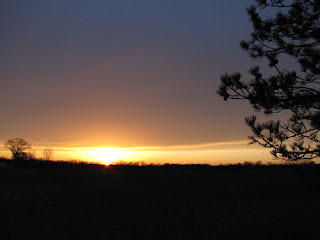 The sun's disk is mostly below the horizon now and the sky already begins to darken. It is interesting to note that our official sunset is shown as 8:14 p.m. and yet the sun will be wholly hidden for me at that time. We have, of course, an unobstructed view of the western horizon and the farmland around Farmersville could not be much flatter. 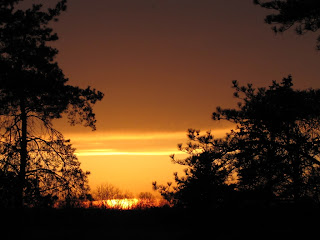 A final look to the west before I head back inside shows the sun now missing from the sky with only its upper edge still producing a fiery glow on the horizon. Night will come on fast.

They rarely bloom. Perhaps no more than two hundred of these Corpse or Carrion Flowers have ever bloomed under cultivation. In addition, they stink.
Two strikes. But that's also what attracts attention, whether you be a fly or a beetle, attracted to the scent of rotting flesh or whether you be human, attracted to the novelty. Since Miami University aimed a webcam at their ready-to-bloom Amorphophallus titanum about a week ago, over 800,000 accesses have been recorded.
It was predicted to bloom on April 3 but the date passed quietly. The following day they thought it would bloom by April 5. It didn't. Then late yesterday, a hand-written sign was posted near the plant. It said simply, "It is now BLOOMING!". Slowly the gray-green petals began to drop showing off their royal purple interior. 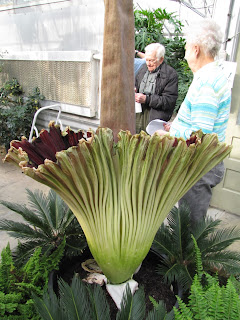 The plant is on public display at the Belk Greenhouse on the Miami University campus. I visited on the morning on April 10 and took these pictures. 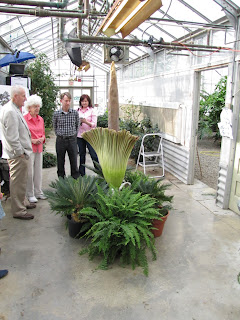 This Carrion Flower - or Titan Arum - began as a seed in 2001. It was collected from Sumatra, where the plant is native, and given to Miami alumnae, Joan McElfresh Leonard ('86), who currently runs The Ohio State University Biological Greenhouse. That's where the plant grew until this spring when it was presented to Jack Keegan, greenhouse manager and instructor of botany at Miami University. 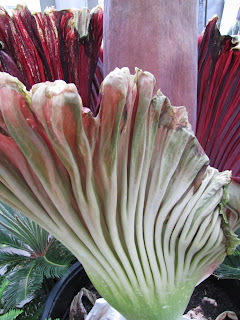 Though the flower - a giant spathe (single petal-like structure) which is the "largest inflorescence in the world" - just opened yesterday, the edges are already beginning to dry. Still, the contrasting color of the greenish exterior and the royal purple inside is striking. 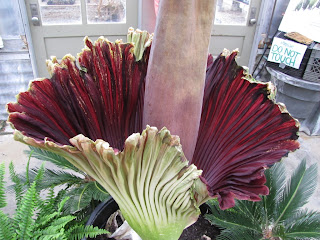 The plant goes through a complex life cycle. From seed it produces a single leaf. After 9-10 months, the leaf dies back for about four months. Then it sends up an even larger leaf. Eventually the plant can produce a single leaf as much as 20 feet high and 16 feet across.
There are four more of the plants in various stages of maturity in the Belk Greenhouse. One tall plant looks like a small tree with spotted bark. 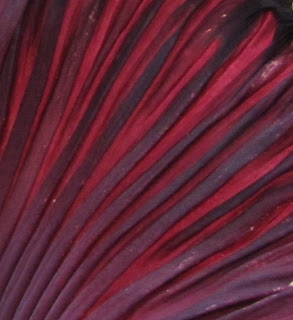 The interior of the flower is ribbed but otherwise simple. The colors remind me of rhubarb. 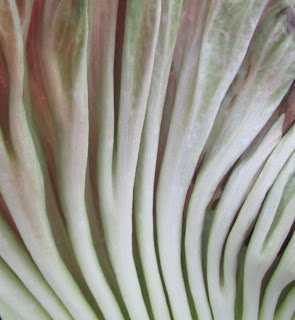 The exterior is equally convoluted but seems a fairly simple structure. 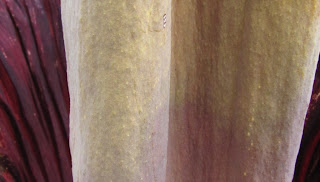 Here's a close-up view of the center structure, the Spadix. This part of the flower contains the male and female parts. It is down inside the flower where the rotten smell originates. I expected this plant to be overwhelming but it was not. I had to tilt my nose inside to detect the rotten scent. 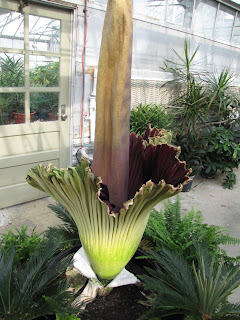 This specimen is small compared to the capability of the plant. The corm (the part of the plant that lives in the soil) can weigh 200 pounds. The largest flower ever recorded was over ten feet tall. 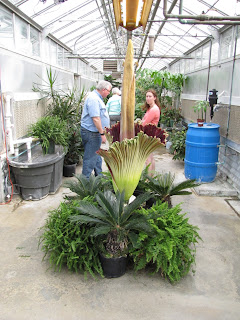 The flower will quickly fade now - they seldom last more than three days - so I feel good that I hurried down the morning after it opened. 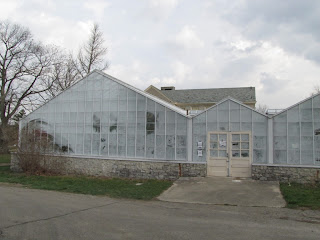 This is a side view of the Belk Greenhouse, attached to Boyd Hall, in the southern reaches of the Miami campus. With road construction, narrow one-way roads and plenty of students between classes, travel was a challenge. 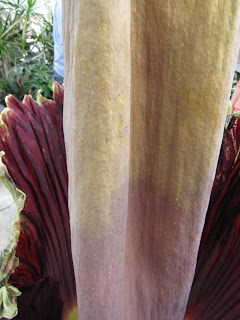 Here's a close-up of the Spadix. All of the pictures can be clicked for higher-resolution versions. You can examine the structure much more closely.
I'll post some webcam images and link to a Miami-produced time lapse soon.

Later:
a. Click here for a video of the bloom and subsequent closing of the flower. Credit: Lawrence Downes. Time lapse covers April 8 through April 11, 2013.
b. Miami's webcam is (was?) located at this link.
c. Two webcam images (and only two) show my visit to the Belk Greenhouse: 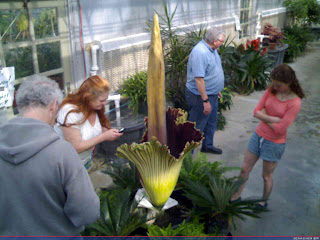 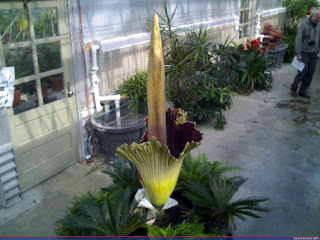 I love pie. I love coconut. When I saw a recipe for an easy coconut custard pie, I had to make it. It's really as easy and as good as they say. 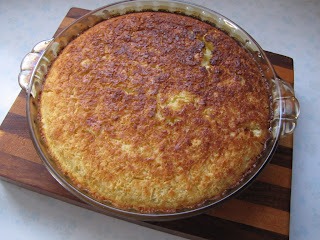 You just combine all the ingredients and pour them into a 9 inch greased pie pan (I used glass). Bake at 400° for 25-30 minutes or until the custard sets. As it bakes, the ingredients separate into layers ... crust, custard, topping. Cool.

I required the full 30 minutes in our oven and I turned the broiler on high for the last two minutes. I wanted the crust darkened but I think this step would not have been necessary.
The pie seemed quite liquid even when the custard tested done. It sets further as it cools.
This morning, after a night in the refrigerator, the pie is perfect. The "crust" is a little crunchy and delightfully sweet. It's a wonderfully easy pie to make and can be whipped together in nothing flat.
This one's a keeper.