On Wednesday, the Space Shuttle Crew Compartment Trainer arrived at the National Museum of the US Air Force. Unfortunately I never considered that the "Super Guppy" might be flying nearly over our house on its way to the museum with that precious cargo.

When a friend posted several pictures of the plane flying overhead, I was disappointed that I had missed it. So I decided to pay close attention when the return flight was planned. Yesterday a local TV station said it was set to leave at 9 am.

I've found FlightAware to be a good, up-to-date source of information on flights, their routes and times. Last evening, though, they had no advance information on today's flight. Early this morning I checked again. No change. But later the flight was shown as being set for 9:50 am, then 9:40 am, and it finally left by 9:31 am.

I wasn't ready. In fact I was still on the computer checking the flight times. Then FlightAware showed it was airborne. It was mere seconds before I heard the drone of the engine. I ran downstairs shoe-less, grabbed my camera and headed out onto the driveway apron.

At first the plane was nearly overhead but it soon had past just west of me. I aimed the camera and shot. 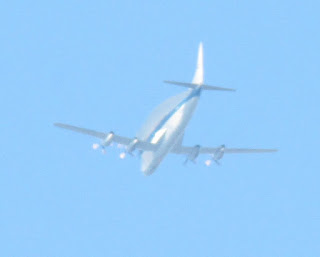 The Aerospacelines Super Guppy is certainly an odd-looking plane with a fat, bulbous body. It looks like it shouldn't be airborne and yet this model has been flying since 1965. Turboprop-powered, it can carry 54,000 pounds and cruise at nearly 300 mph. It has a ceiling of 32,000 feet.