What could prove the progress of spring more than morels? Those beautiful yellow mushrooms are now standing tall in the woods and in that special place known to only two people on the planet. I am always startled when I first see them standing there amid the dry grasses of last fall and the shining seedlings of spring. 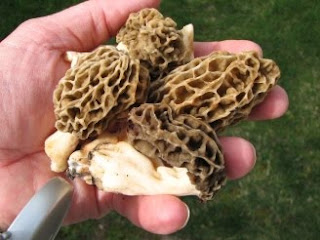 They are often curled beneath a twig, unable to lift the weight and so grow gnarled and crooked. I turn the leaf litter over, move a few branches out of the way, and the treasures are exposed to the light of a gorgeous spring day.
I always carry a small plastic bag when I go to the woods now. I pinch each mushroom off near the earth and bring it home with pride. My mother slit each of them lengthwise, breaded them with cracker crumbs and eggs and fried them carefully. What a meal is this! It is so much the better for its exquisite rarity. We will not have more until next year; the season is surely over. But what a wonderful time I have picking these gems, enjoying the songs of birds while I stoop, cursing my old spine all the while. I am repaid a thousand-fold for my pain. 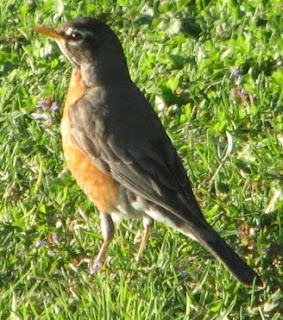 And the robin - a new one at that - canvasses our north lawn looking for the early worm. I watch as he darts his head earthward, pulls the worm to an enormous length and eats it on the spot. It is a cruel world. How could we have evolved to eat our fellow creatures?
The robin never fails to amaze me with that rusty breast. Overall he pails to the male cardinal and yet he is stunning with that vest of tiger-orange. "Robin red-breast" we would say as children. Do they learn that any longer?

On Sunday evening we were all out working in the yard: Dad was finishing a small section of the grass with the lawn tractor; I was digging dandelions and completing other odd jobs; and Mom was trimming around trees.
I was temporarily walking across the back porch when Mom came around the corner of the garage with both an excited, expectant look and a smile on her face. "Come quickly and look at what I found," she said.
She led me behind the garage to the stump of a pine and told me to approach quietly. "Look!" she said, as she pointed to the ground. 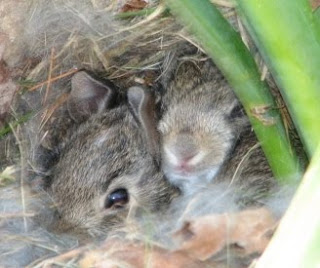 There, nestled amid the lilies, was a nest of baby rabbits. There were three visible. All were squeezed together so that even their ears were folded and compressed into the small space.
None of them moved. They just looked at me as a took a couple of pictures. Where it appears foggy around the edges, that is rabbit fur that has been placed there by the mama to line the nest. I'm sure many cold, spring nights were spent in that small earthen hole.
A year ago, about this time, and on the southernmost portion of the lawn, I drove over another nest with the push mower. One rabbit, which popped out of the hole just as the blades passed overhead, was killed. I'll never forget watching it die at the base of a tree, wholly unable to render any assistance.
This year, however, there is a new family of rabbits and now that we know where they are, we will be extra careful. A flower bed is a much safer spot.
Last evening (just a day after the picture was taken), I walked back to have a look and saw but one rabbit visible. Probably a couple have hopped away and will be starting families of their own before the summer ends.
Life goes on. This wondrous nature contrives all around us to continue. Get the next generation down on the ground! Fill in the spaces left by those who have died! Move forward! March! The world goes on. Nature waits for nothing.

And just two days later, all five bunnies left the nest! Here's what they looked like before hopping to the meadow and disappearing into the early growth ... 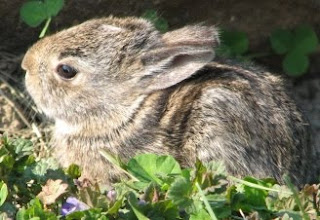 It is always one of the happiest days of the year for me, when I go to the woods looking for the first morels and come home with the news, "They're here!". It is not truly spring until this day arrives.
So this year it is April 9. I checked my favorite spot just last evening and found nothing. But returning at 2 p.m., there stood two of the still-tiny beauties. They are small, probably just "sprouted" and I certainly didn't pick them. I'll give them a day or two to work their fungal magic. 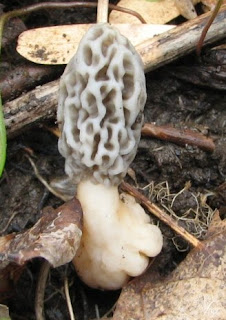 This is the Yellow Morel - Morchella esculenta - and the prize of anyone's hunt. There is no taste so succulent and so earthy as this mushroom (I have never had a truffle so perhaps I am no judge). But I know what I like and a morel fried in olive oil, else chopped and placed within the folds of an omelet, can't be beat.
This shot (above) is cropped from the one below. I wanted you to see the clearer detail. 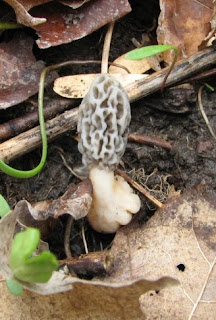 Finally, a second morel comes to life through the leaf litter and gets its first look at daylight. 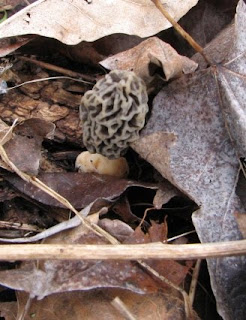 It was a "warm" night (though cooling rapidly with the passage of a cold front) and a full inch of rain fell. There were two rounds of heavy rain: the first washed across the shingles at midnight, the second a mere hour later and this with lightning and thunder. I lay awake and listened to the rain pour over the rain gutters.
It's a cool Miami Valley day (49 at 3 p.m.) but apparently the morels find it to their liking.
And what the morels like, I like, too. 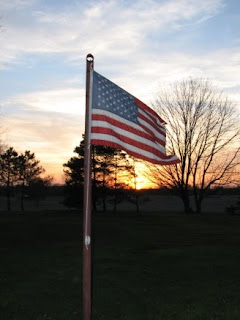 Driving home from a meeting I was covering for the Dayton Daily News last evening, I pulled into our driveway just as the sun was setting at 8 p.m. The flag was backlit by the sun and appeared almost black.
How about if I add some flash?
The wind was whipping from the south and the flag stood out stiffly as I shot this picture. 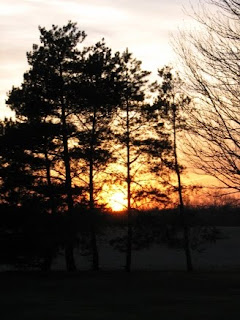 The sunset itself was quite beautiful after another warm (84) record-breaking day. This April has just turned a corner and left winter quite behind.
The house was so warm - and we are not disposed to use the air conditioning so early in the season - that I opened a south window when I went to bed. I couldn't sleep for the breeze which ruffled across my bed and left me almost chilly. I tried it for two hours but eventually got up and pulled the window closed.
Tonight? Thunderstorms, they say, and then much colder. Normal, I'd say.
Posted by Bill at 12:41 PM

Six-spotted Green Tiger Beetle - Cicindela sexguttata - it is called and of such a brilliant iridescent green that it is startling. Mom and I were stepping out the back door on April 1 and Mom motioned for me to look at the insect which she was watching on the porch floor. It was like looking at a molten speck of animated green metal. 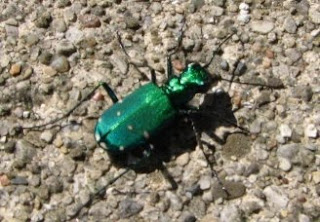 I went back into the house and grabbed my camera, set it for macro mode, got down on my hands and knees and took this picture. His entire body is no more than about half an inch long.
My insect book says this guy should not be emerging until summer but the 80 degree spring day probably duplicated those conditions very well.
The bug would literally run from my camera then stop and watch me. He flew a few times, too.
What miracles of nature are such as these! With what amazing shades nature dips her brush!
Posted by Bill at 6:39 PM