Last evening (03/26) at about 9 p.m., I took my camera outside and enjoyed the night sky. To the east, already high above the horizon, was a waxing gibbous moon, 84% illuminated, and shining its light across the fields which seemed to stretch forever. The patches of snow that were left from the storm the day before, fairly glowed in the moonlight. I could have imagined, there in the dark, that I was looking down upon scattered clouds.
While the sky was not perfectly clear, the moon was generally so brilliant as to command most of my attention and I clicked off shot after shot. A moon this close to full is not a good one for crater shots (they are lit more 'head on' rather that from the side which makes them seem to explode in relief) but still the craters near the terminator stand clearly apart from the mares. 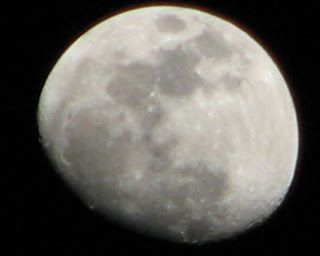 What a night to stand there, clad in bathrobe and coat, and see the moon course silently overhead and the spring peepers, so much closer, carry on with their high-pitched trill. What do I know of the nature of their calls? Why one night is the woods alive with them, the next wholly silent? It does not seem the weather but something I cannot come to terms with. 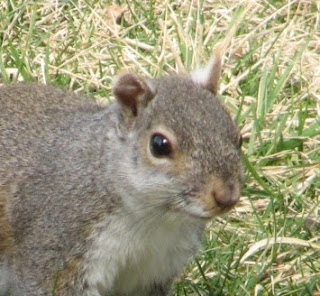 Yet a day or two before, the squirrel which frequents the ground beneath our suet feeder for the birds, was doing his usual clean-up job as I was washing the dishes. I stopped scrubbing a pot and saw that he was observing me. He had stopped eating - at least momentarily - and was intent on the being on the other side of the glass. We both watched each other for a few minutes.
Finally I left to get my camera and coming back I began taking some pictures. He'd grab a seed or two and then look back up at me. Was it safe my being so close? Then, concluding that whatever I was pointing at him could not be safe, he flicked his tail a few times and made a hasty retreat.
It is spring at Pinehaven and the peepers fill the night. The squirrel has made it through another winter. The moon continues its orbit overhead. Down here we complain about health care. But once removed from human society, the world goes on as it always has.
There is hope that we'll yet again turn our interest there.
Posted by Bill at 10:51 AM 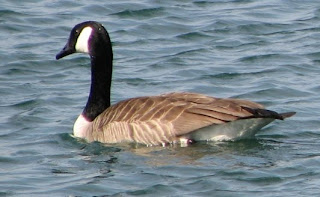 Yesterday as Mom and I were walking at the Farmersville/Jackson Pond, we saw that two mallards - a male and a female - and two Canada Geese who were enjoying the warm (65 degree) sunshine. A light breeze ruffled the water as they floated along. 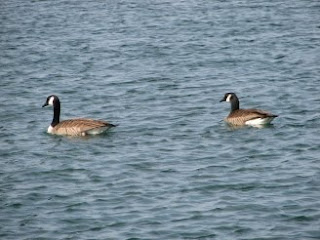 We never saw such as these when I was a kid. It took a trip to Bear Lake, Michigan to see this beautiful bird. I remember approaching one on the beach and getting quite a remarkable hissing at. Anyway, Branta canadensis is fairly new to us here in the Miami Valley. We've enjoyed them only for the last couple of decades, I'd guess. 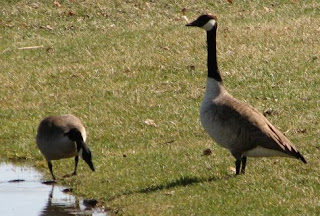 Our pond is too tiny for them to stay and lay eggs. The small space could offer no protection and the constant walkers are probably a real annoyance to these majestic birds.
Posted by Bill at 1:22 PM

I'm getting a little old for an Easter Egg Hunt, don't you think?
Well, let me tell you a little story. When I was a kid, there were three things I wanted to do that I never managed. The first was to hunt Indian arrowheads with my grandpa; the second was to climb the steeple at the Lutheran Church in Miamisburg; and the third was to take part in the Easter Egg hunt at Mound Golf Course.
Three little things, all never done. Until now. Change the count to two. 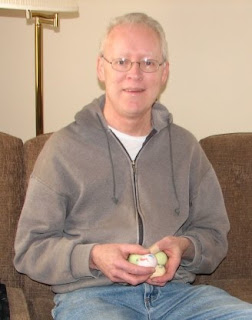 Here I sit with four Easter eggs which Mom hid this morning while I was working on a newspaper story. She dyed them last evening while I attended a meeting. We had only green dye so she managed a rosy-shaded egg with beet juice and a nice shade of earth-brown with tea.
She and Dad were laughing when I came down the stairs with my story to be edited. "You'll have your Easter Egg hunt this year," Mom said. She said she hid four eggs: one in the kitchen, one in the dining room and two in the living room.
I found the first when I tried to put my shoes on to go out and get the mail. The egg was pushed deeply into the right athletic shoe, right up to the toe. The kitchen egg was behind Ginger's treat container. One of the eggs in the living room was beneath Dad's bed and the other was nestled near the fireplace.
Well, I've had my hunt. Two to go.
Posted by Bill at 12:06 PM

Last evening (03/17) at about 9 p.m., the moon, just a sliver of a waxing crescent, was setting in the west and I took this shot. There was little of the moon lit directly by the sun but the entire disk glowed with earthshine. The moon is framed between pine branches at the western edge of our property.
While I stood there taking this time exposure, I noticed the spring peepers were singing. This frog is one of our earliest signs of spring and yet the air was quite chilly. It was an eerie time, with the moon no more than an apparition through the pines and the chorus of high voices drumming in the distant treetops. 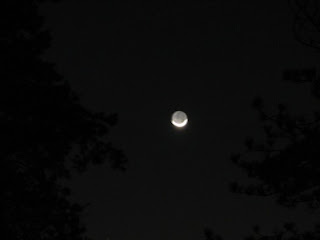 And here (below) is a cropped shot of just the three stars that contain the Orion Nebula, M42. My digital will not take a long enough time exposure to bring out the colors but still, it is there in the smudge. It wouldn't matter if I had a better camera anyway; I would have no way to track the sky for longer exposures. Ah, someday ...

And finally, the constellation Orion, the most beautiful in the sky to my way of thinking. At the top, gorgeous Betelguese;Rigel at the bottom right. The belt, the sword in between. This chance aligning of stars is enchanting from our vantage point. 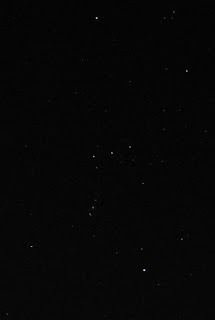 But now they begin to rise too early and climb closer and closer towards the sun. Soon Orion will be lost in daylight's glow. It is actually a sad time for me. I await these stars each fall and am happier throughout the long winter nights knowing they are overhead.
Now, goodbye to Orion. I'll see you on the other side.

At the south edge of our property stands a pussy willow, sold to me as though it was gray - and it was ... the first year - but which reverted to pure white again by the second season. I cared that first time I saw white, thought I had been cheated. No more! 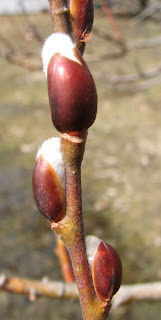 And I thought the other day (03/09) when I took this shot that I had never seen the pussy willows budding so early. But looking through my blog of a year ago, I see the plant in full bud only a day later and now think the poor plant is positively behind schedule.
Throughout the rest of the year, the pussy willow is no more than a nondescript bush. But now, as it blooms before anything else, it is spectacular in its fearlessness. Let the warm days come followed by bitter nights! Still it sends forth those fuzzy white buds. Let the storm pelt! Still it unfolds those delicate catkins.
Today I walked to our meadow to see if any of my spring bulbs survived (both the weather and the squirrels) and I found clumps of daffodils in profusion. Most wave swollen buds atop their green stems. I must plant still more so that someday some passerby will stop and admire my foresight.
We plant as we write: for ourselves and for the future.
Here, on 03/16, is the same plant so that you can see the progress: 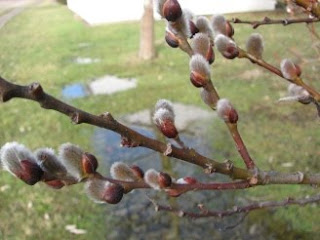 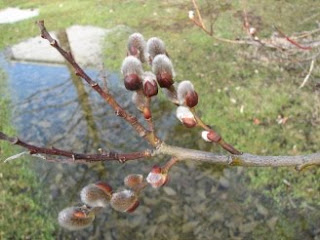 Here, then, is the love of my life, Ginger. A not-so-miniature Schnauzer, Ginger was originally my brother's and she made her way to our home after a divorce. We had been "dog-sitting" for some time and Ginger always enjoyed her time with us. Too much, I suppose. Eventually she was happy nowhere else. 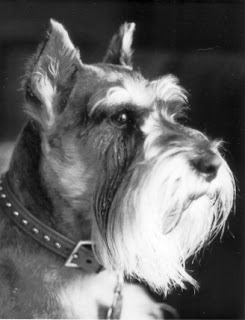 Nor have we ever again been happy without her. Her life was short, 1977 - 1988, and none of us have ever gotten over losing her from lung cancer. 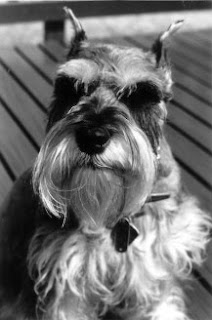 The perfect dog, Ginger enjoyed the deck at the rear of our house in Moraine's German Village subdivision. I always liked the lighting here and took many pictures of her there. 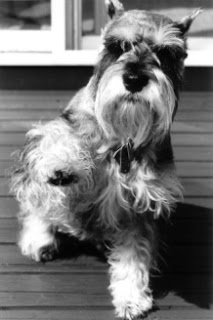 You could always say "shake, Ginger" and a hand would lift and a paw extend. She'd hold one paw in the air for a while then put it down and lift the other. 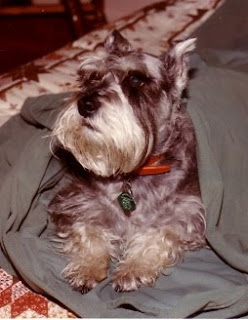 Here she is wrapped in a robe and on Mom's bed. She slept with us, of course, because she was truly one of us. 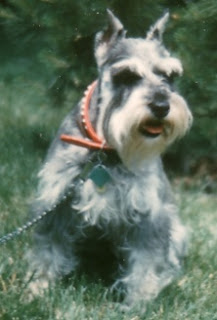 In her earlier years, while we still lived in Miamisburg, I took this picture in our back yard. 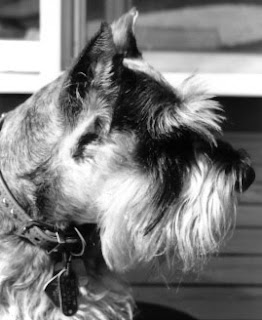 Another shot on the deck in Moraine. 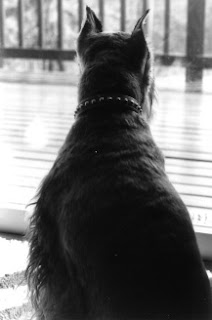 Finally, a rear view of that gorgeous, faithful dog. It'll be 22 years this December since we last held her. Pictures are no substitute. But they are all we have, that and memories.

Winter is down to its final two weeks and, though the ground still has drifts of snow about, there are signs that things are changing. I took this shot last evening after I walked behind the barn to have a look at a particularly persistent drift of snow. I pulled a coat atop my robe (yes, I was already ready for bed) and a pair of athletic shoes and stepped gingerly through the crunchy snow. When I turned and look back at the house, this is the view I saw. 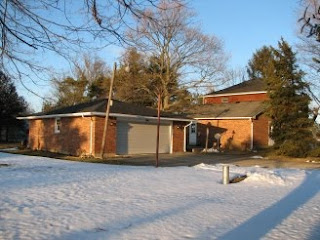 It's a winter view, to be sure, but it already has some of the warm glow of spring about it. Sure, the sun was setting and the oranges were enhanced, but still, I feel spring. A cardinal is singing a purely spring song of late and I stop and listen to the individual notes of the call. Usually five, but varied. Sometimes a brief three; every now and then six. But it is the sure song of spring and I welcome it. I hear it in the morning before I am even out of bed. 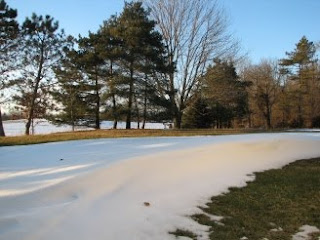 Behind the barn is the long drift of snow, laid there by the barn itself as the wind whipped along its side. The snow is 2-3 feet deep in places and would come nearly to my waist. And yet in the same few steps, I'd come across bare ground. That snow which lay out on the level has long ago melted. Only those deepest spots remain.
I set out to fix the mailbox last evening, too. After it was knocked off by a snow plow, I hurriedly placed it back atop the platform with bungee cords. We looked like the "Beverly Hillbillies" and it grated on me every time I went by. The box (and the post, too) hung at an angle. So I took the box down, drew the old bent nails, replaced the wooden platform and screwed it all back together. It will work until I can buy a new one. At least I imagine the mailman has stopped laughing.