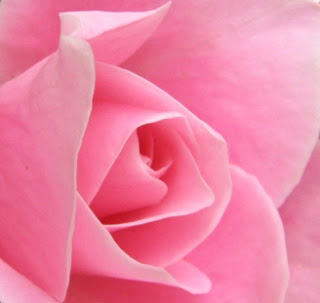 This pink rose was here when we moved to Pinehaven over 23 years ago and I know it's been moved a few times. Still it blooms ... exquisite simplicity ... year in, year out.
The flowering rose contains the whole of my philosophical ideal. Think of the chemical signals coursing through the tissue, this instruction cascading into the next, as DNA controls the nearly impossible mystery and does it time and time again. And the rose? In my heart I think the rose knows nothing of the bloom, just follows the steps written into its lineage, completing each before the next, eventually unfolding into impossible pink.
Is there anything more perfect than these petals? Does heaven and earth ever rise to more than this?
As I walked along the roses, lined behind our garage, I felt the warmth of the brick blanket my forehead as I leaned forward to take a few pictures. This one: perfection. As the picture opened on my computer screen, I almost gasped. Is it possible that another gray, cold winter has opened into this?
I am in equal awe that my heart beats.
Posted by Bill at 1:51 PM

I should not take any credit for the blooms other than sharing a bedroom with this beauty. It is Mom who waters it once a week - on Wednesdays - and seems to give it the care it wants. I merely have to be present and enjoy it. And so again it blooms. 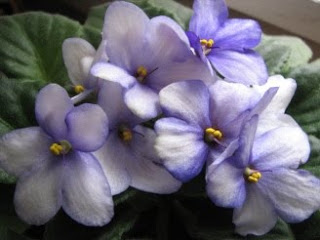 Aren't these lovely shades of creme and blue? This is as delicate a flower as an orchid and, for some, requiring just as much care. But we step back, let the plant enjoy the soft light coming through a south window (with a thin white curtain in between) and just await the next blooming cycle. 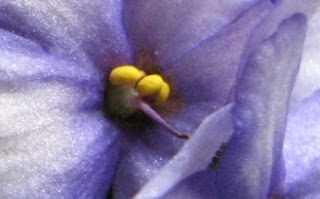 I hardly photograph the plant every time it blooms but this same plant has appeared in the Pinehaven blog a couple of times before. Check our July 9, 2008 and August 16, 2009 to compare the blooms.
Isn't this close up delicate? You can see the water contained in the petal, a translucent window into this plant's soul. I am happier in the morning when I wake, look towards the window and see this cascade of royal color.
All's well with the world when we have blooms to remind us of magic.
Posted by Bill at 11:45 AM

Yesterday Mom and I decided to take an afternoon walk at the Farmersville pond and as I stepped from the car, the golden mustard, now in full bloom, was lit by the sun and made quite a brilliant display. 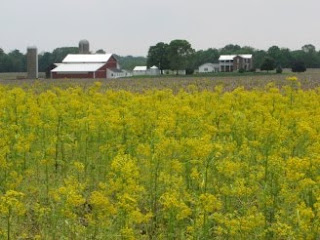 Standing in the parking lot, I shot across the top of the mustard which fringes the field, cleared of last year's corn and probably ready to receive soybeans. The bright mustard is no more than weeds to the farmer but it is a breathtaking display for a couple of walkers.
It will be gone soon, sprayed with herbicide or else cut down with the plow as the crops are planted. But for these glorious moments of late spring, the brow of the field was resplendent with sunny yellow, both above and below.
We walk in magical times, these seasons, each ready to present to us a view that no other can mimic. This is spring, not summer, and the view can be had no other day. We have one chance and one chance only. Tomorrow will not be the same.
Posted by Bill at 9:05 AM

Monday (05/03) was as pretty as day as we've seen all spring: warm (76), calm and with constant sunshine. Throughout the day I watched as a cold front began digging into Illinois and firing up storms. The National Weather Service said we'd have our turn toward nightfall.
The pictures I've posted below were taken within a mere three minute period. The first of the seven was taken at 8:26 p.m.; the last was taken at 8:29 p.m.
In this first picture, I'm facing west towards the oncoming storm. The worst will skirt north of here. 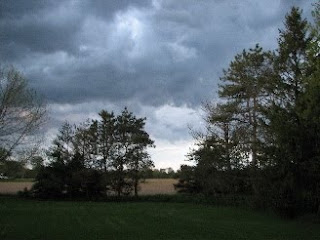 This shot turns and looks to the southwest as the angry clouds gather. 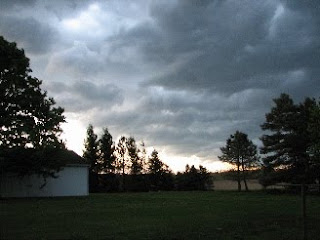 Then, looking southeast, the clouds begin to tear and swirl in a three-dimensional effect that was absolutely dizzying. Looks like tornado weather, doesn't it? 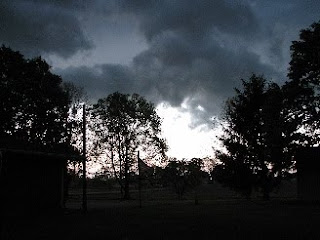 I am standing in the middle of the backyard at 7:27 p.m. and I turn and look directly overhead for this shot. The layers of clouds are in constant motion, different levels sliding different directions. The sky is dark and light at the same time. And still not a drop of rain falls. As I stand there in my pajamas and robe, the wind is cold as it gusts. Still, the thermometer reads in the 60's so perhaps it is a sensation of fear? 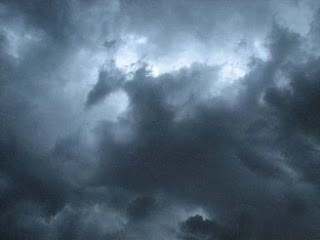 Looking northwest, roughly towards Dayton, the wind whistles as the spring day winds down to a cool, wet night. 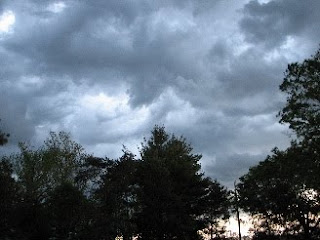 Looking south, the sky has darkened by degrees. It is now 8:28 p.m. and the sun is low. I'm taking these pictures on the camera's "auto" setting and it is choosing an increasingly longer exposure time. This makes holding the camera difficult without getting a blurry image. 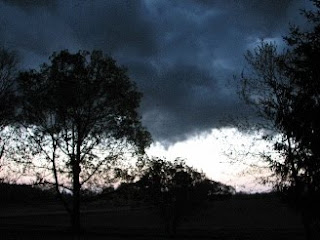 Finally, I've walked around the garage and look back at Pinehaven. That's where I'm heading fast.
I slept with the window open and listened to rounds of thunderstorms pass around us. We had a mere 0.12" of rain. Sometime about midnight I got up, closed the window and crawled back into bed. The gentle rain lulled me quickly back to sleep.
I believe we dodged a bullet. This angry sky might just as well let down a tornado. But this time, the storm passed slowly to the northeast and died with the night. 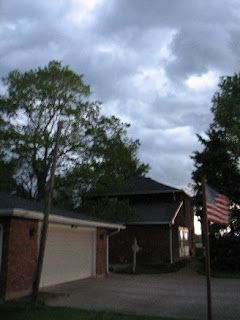 We continued our summer walking season in earnest this past week or so, going the round of the track at the Farmersville-Jackson Twp. Recreational Park. Across from us, on the east side, is an enclosure of goats - say four or five - that are usually happily munching away at the grass. I thought I'd walk over and say a friendly hello. 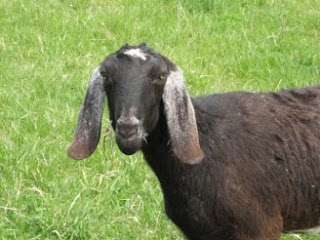 Only this guy walked up to me, even lifted his head for a minute or so while I took this picture. Then, figuring that neither I nor the camera amounted to any danger or much interest, he quickly became bored and went back to grazing. He did not look up at me again. 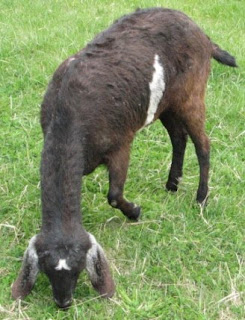 This, instead, was the usual pose of all of the goats. It is interesting to listen as they crop the grass as you can hear it tear roughly from its roots. Thus they eat, morning, noon and night, for what else is there to do?
Every now and then I hear their call - almost a sheep-like baaaa - and then they go back to eating quietly again. 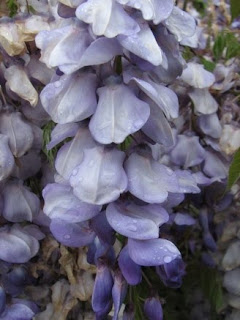 At my aunt and uncle's house in Miamisburg, this wisteria is blooming and like never before. This is the bush variety and it has cascades of purple on all sides, a sort of royal waterfall. The plant has been there for many decades and my uncle insists a pruning he gave it earlier caused the profuse blooms. Makes sense to me. 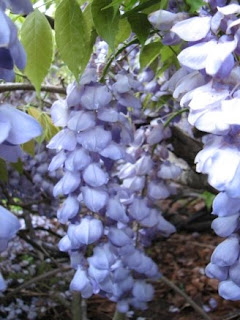 On the other hand, I have seen other similar wisterias which are also in abundant bloom. I suppose the winter's weather had something to do with it, too. In any case, the blooms are magnificent this year. As I snapped these pictures, swarms of yellow jackets buzzed about my head, intent on getting to the ready nectar. The scent is truly intoxicating. 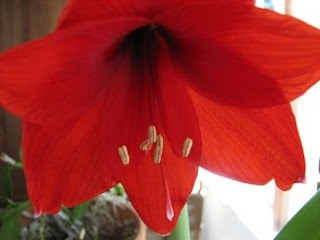 And on our enclosed porch, our Christmas amaryllis is now fully open. It looks like a double fire engine red trumpet. It is glaring in its brightness. 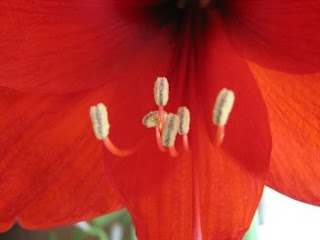 Here, close-up, are the male parts of the plant which it has proudly displayed at our window. Nature knows no modesty! Should any of us provide such a display - near a window, yet - we'd be arrested!
Posted by Bill at 12:25 PM