A Visit from Mr. Toad

Perhaps it's because of the recent wet weather, but I've been seeing more toads than in year's past. When I find a small one, particularly if I'm mowing at the time, I'll stop the tractor, pick the toad up and deposit him by the garage, behind the cool, leafy hosta.

I know I've moved four small toads to that "safe" spot on the north side of the garage. That might also be why in recent weeks the rat snake has been hanging around the garage: an easy dinner.

Today I've already finished with my mowing and I was already showered and walking back to the garden to complete a few small tasks. But there, on the concrete back porch, sat a large toad, seemingly unafraid of me. Only when I got too close would he hop but it seemed to be more of an automatic reaction than actual fear. He sat there contentedly while I photographed him or touched him gently. 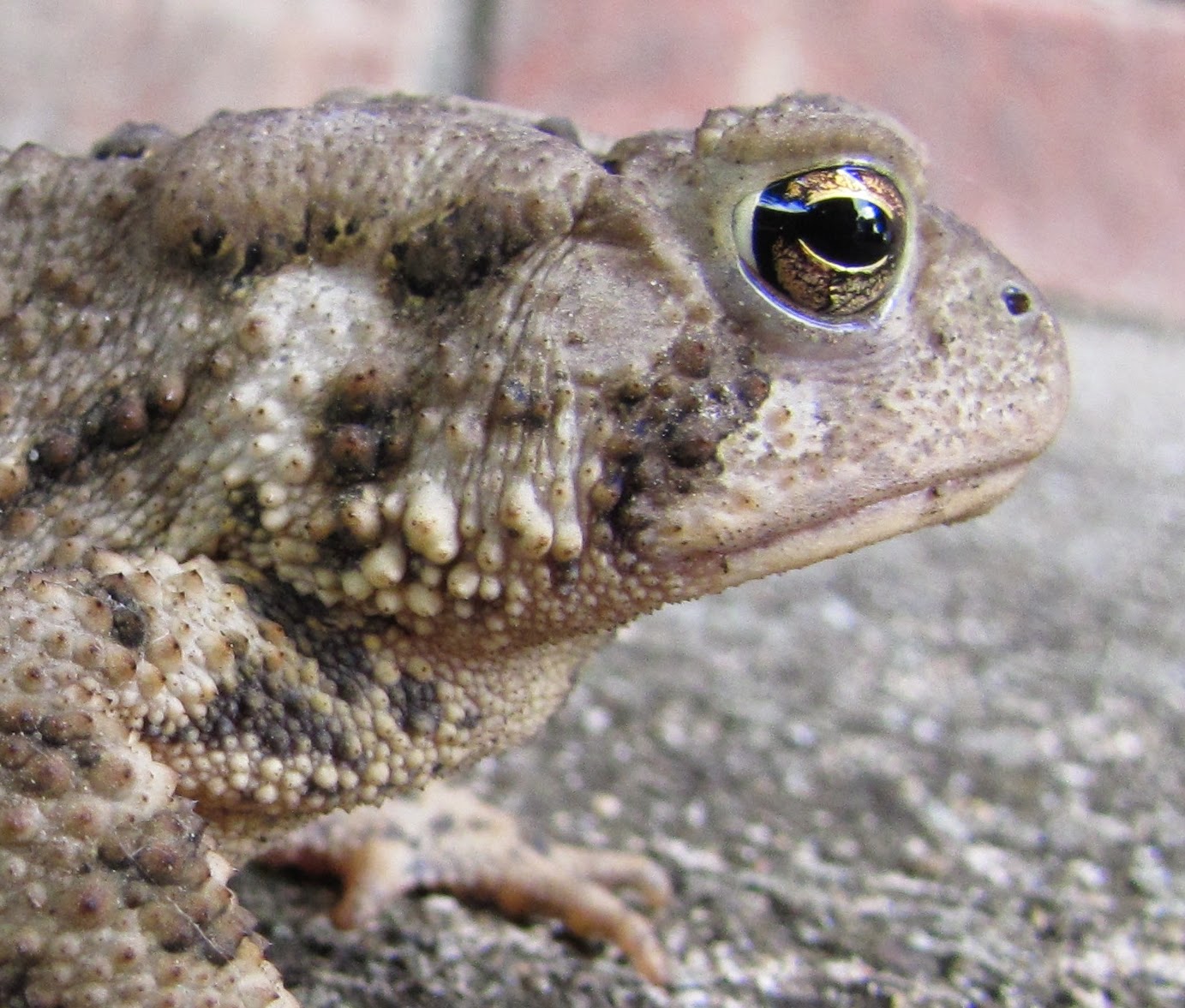 Is he a toad or a frog? Well, most would commonly call this a toad. But in actuality, there's no difference. Both animals are amphibians and both belong to the same order (anurans). True toads belong to the family Bufonadae. 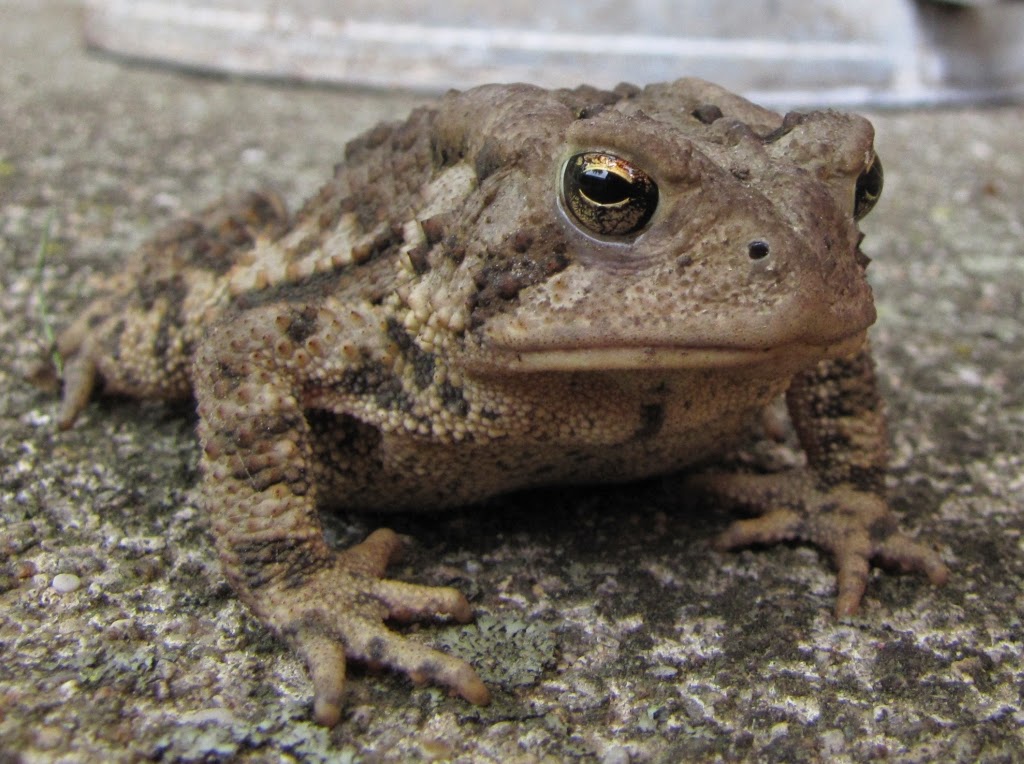 And the "warts"? Nope, not going to cause warts in people (I'd have plenty by now if this was the case). That bumpy skin, however, does secrete poison but it's generally effective against the toad's enemies, not people. Still, after handling him, I washed with soap and water. No sense getting anything into my sensitive eyes. 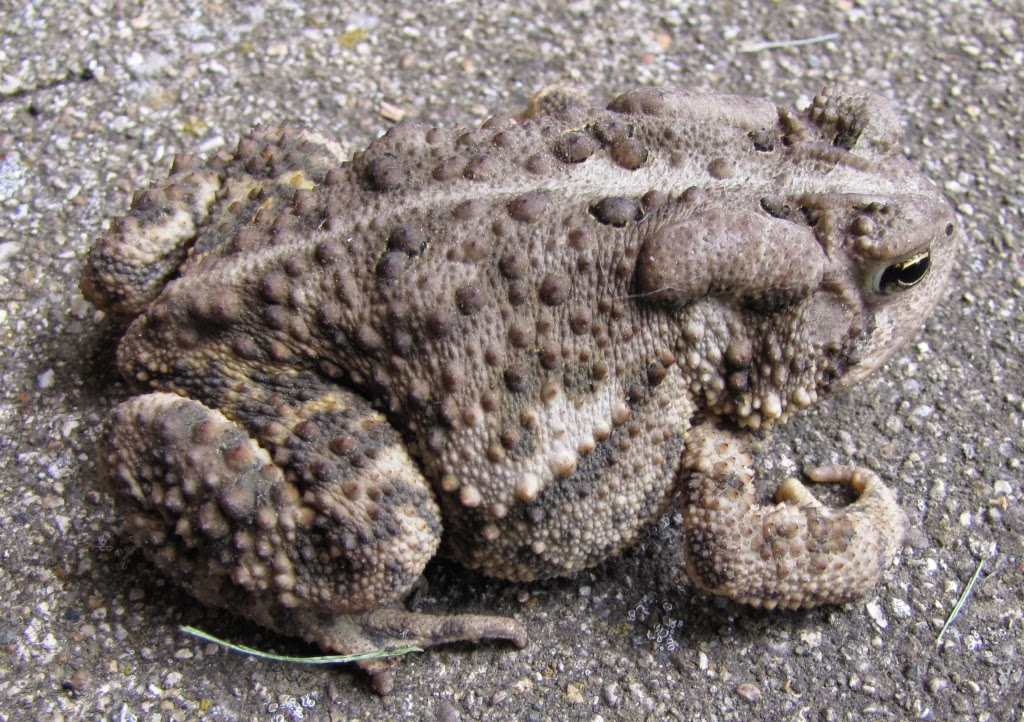 The bumpy skin is actually a most effective camouflage. Sitting on bumpy concrete, a quick glance does not differentiate the toad from the cement. The contrast is very slight. 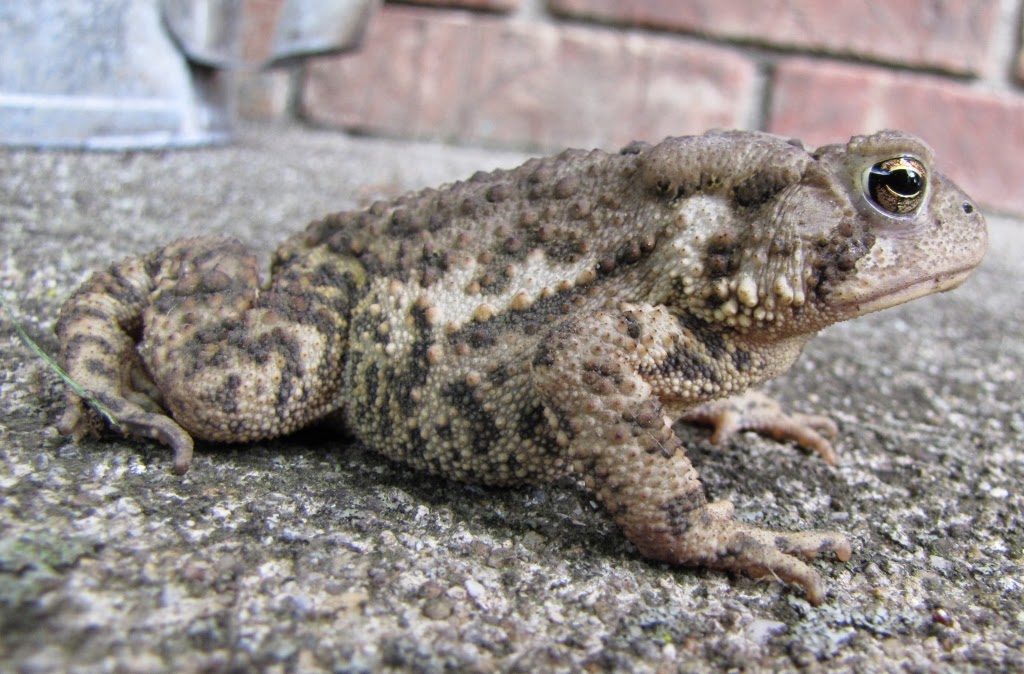 This is a larger toad than most and one that I'd probably see easily while mowing. I considered carrying him to the hosta bed but Mom thought best to leave him alone, letting him choose where to go. I suppose there's good eating on the south lawn and that's what appears to be within his sights. 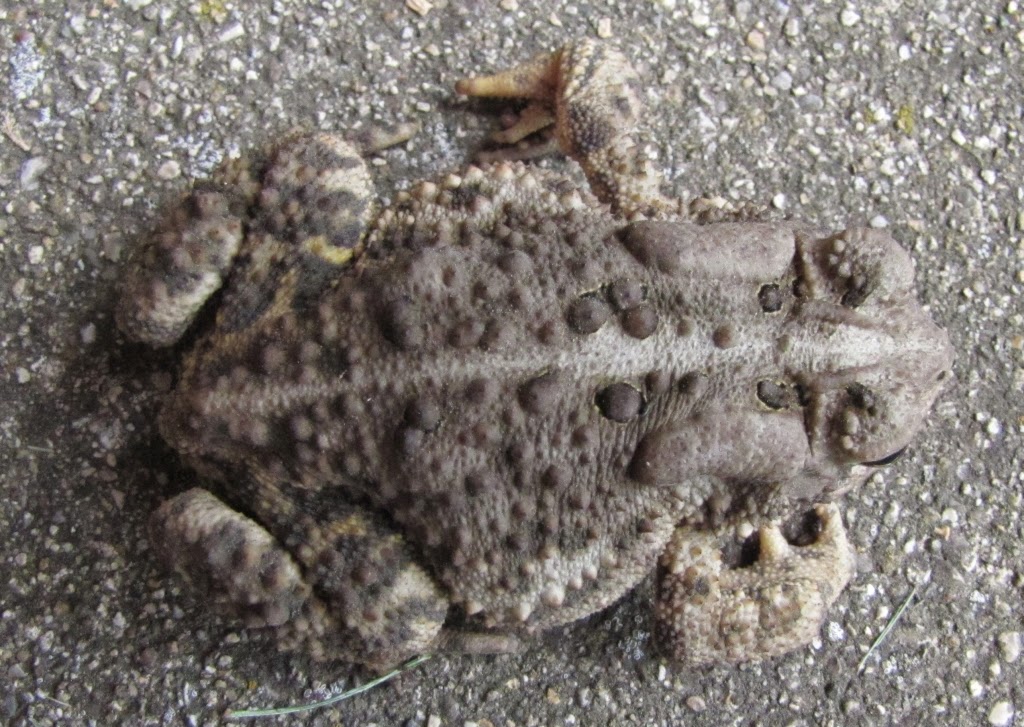 Here's a final shot, directly down from above. Let's hope I see him again in the weeks ahead. While he might not make the final definition of beautiful, isn't beauty in the eyes of the beholder? In my eyes, he's as pretty as toads get.

It's just the 20th of the month with still a full third to go, and we've nearly reached our normal rainfall. As of this morning, I've recorded 4.13" (normal for June is 4.19"). As I type at 1:30 pm, I hear thunder passing both to my north and south. The radar looks as though I'll stay dry for a while longer.

That's not been the case in past days. Take Wednesday (6/18) evening, for instance. By 7:30 pm, the wind was gusting and thunder was booming just to our northwest. The sky was leaden and heavy and as I ran outside with my camera, the 91° heat of the afternoon rapidly melting away on a stiff breeze.

Thunderstorms were pulling lofty air down to the ground as I stood there, churning the dark clouds into angry masses. 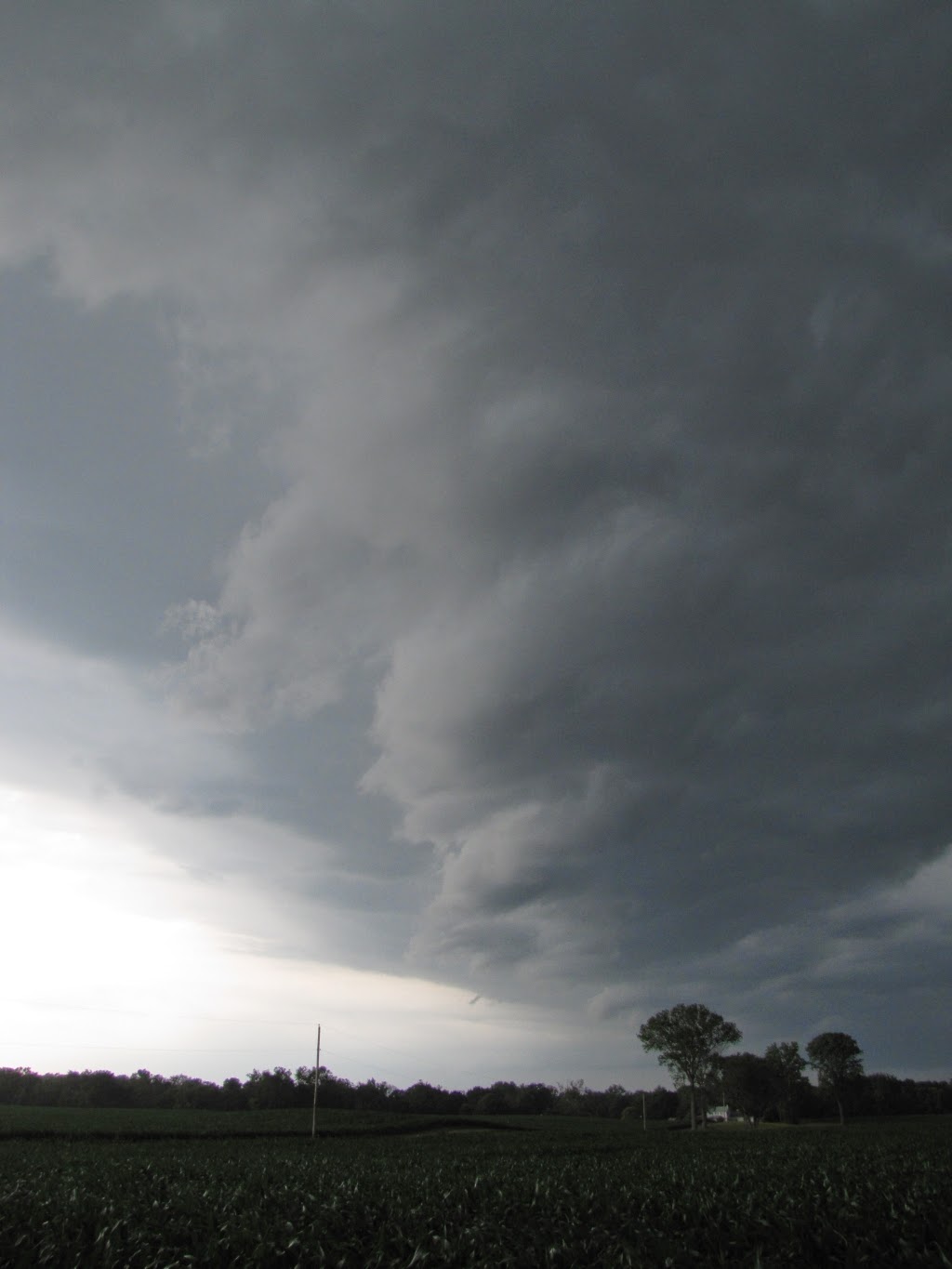 These two views (top, vertical; bottom, horizontal) show the storms just as they're arriving. I am shooting to the west, thus north (and the storms) is to the right. 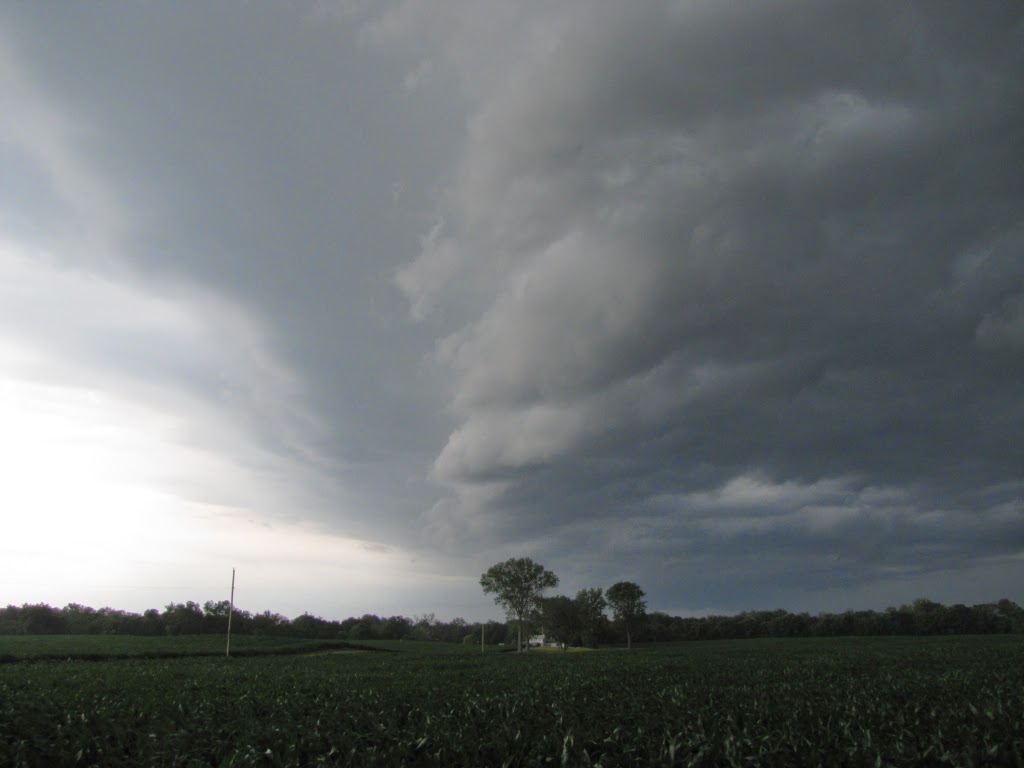 Sam's farm is behind that tallest tree, about a third of a mile away. As I stand there in pajamas, the air is cooling quickly and giving me goose-bumps. 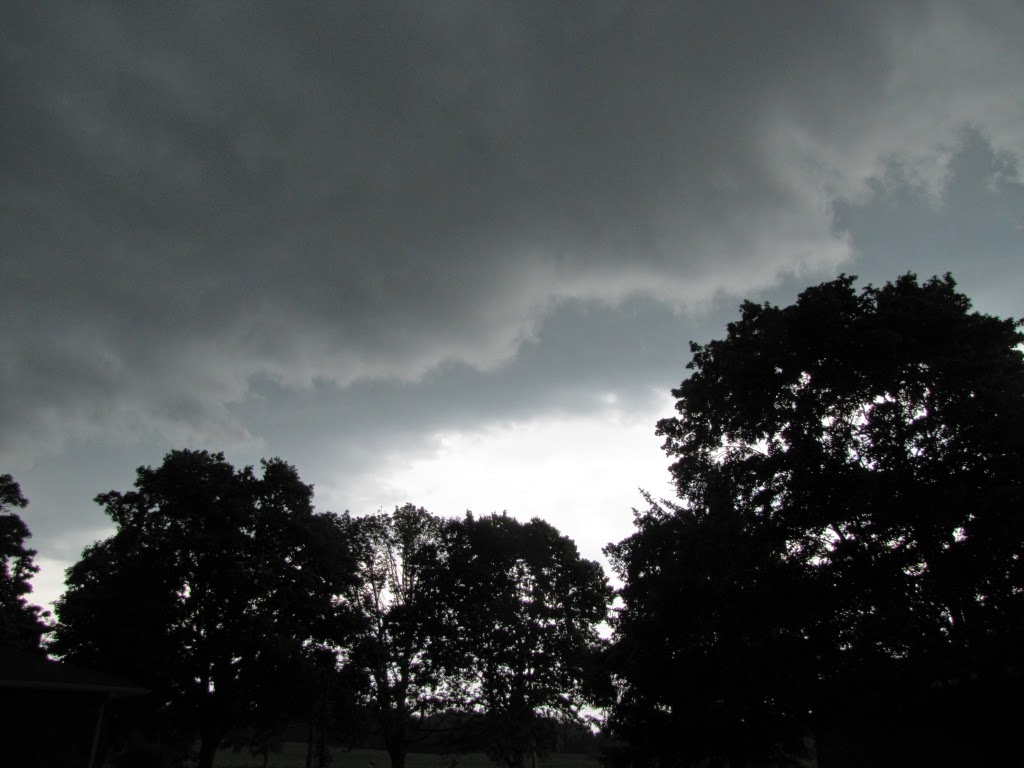 This shot was taken a few minutes later, from our back yard, and facing south-southeast. The storm clouds are just passing overhead and I'm beginning to feel the first drops of rain.

Last night was a delicious night to sleep. It dipped to just 66° but that's cool enough to calm the HVAC units. There were no wild storms, just garden-variety thunderstorms which punctuated the early morning hours with far-off thunder and muted lightning. I pulled a light wool blanket up and drifted in and out of sleep, sure that all was well with the world.

If the grass and garden are being watered in this natural way, my work for the day will be less.

This pattern continued throughout the winter. On January 28, we dropped to -12°, the coldest night of the year. All told, we dropped to zero or below a dozen times. Most winters we do not see the temperature dip to zero even once.

It was one "polar vortex" after another. I spent many nights checking pipes, making sure the kerosene heaters were safely burning, watching the snow build up outside the window. It was a winter I just wanted to get over and done with.

The roses, I see now, felt the same way.

Mom had six roses. We were left with only half of them as spring arrived. A few sprouted from their base (though nothing living came from the tops of any). I dug the remainder up, checking the roots for any sign of life. There was none.

And yet as brutal as the winter had been, the remaining roses have been magnificent. Especially the Lincoln Rose. 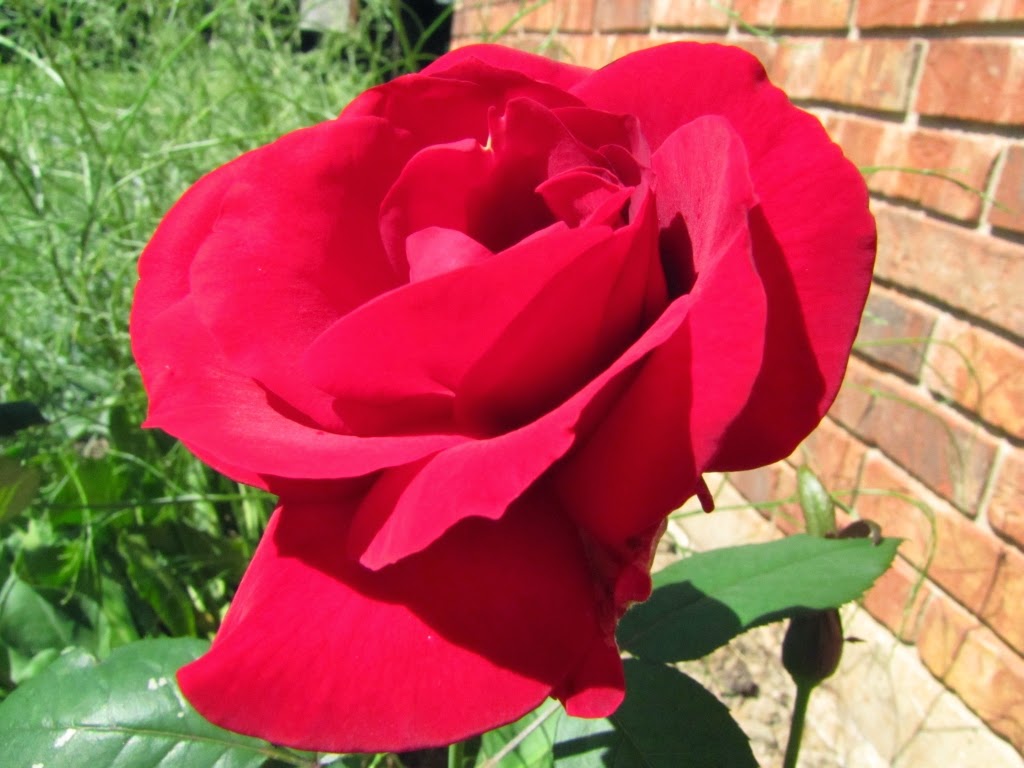 Perfect, isn't it? There seems no deeper red in any rose. I am told these have a nice scent but I can smell nothing of significance. My sinus infections and allergies have taken that ability from me.
We have other roses blooming now, too. One is a pink rose that was here when we moved to Pinehaven twenty-seven years ago. It is a less showy rose, a little more shy and the delicate pink blooms smaller and less spectacular. Still, I give it credit for tenacity.
In the spring, I cut each rose back to its base and waited for sprouts. It was disappointing to find only these few successful. But what we have left - though Mom says the flower bed at the back of the garage is no longer balanced and that she doesn't like it at all - have flowered beyond all expectation.
Those that survive have reason to celebrate.

When we got home from the grocery, I headed back out the door and walked to the mailbox at the road. I took the sidewalk beside the garage on my way out and came back the same way ... mere minutes later.

There, lying in the sun, extended full-length was a Black Rat Snake (Elaphe obsoleta obsoleta). Too bad I wasn't being video recorded. That graceful jump would have been memorable. 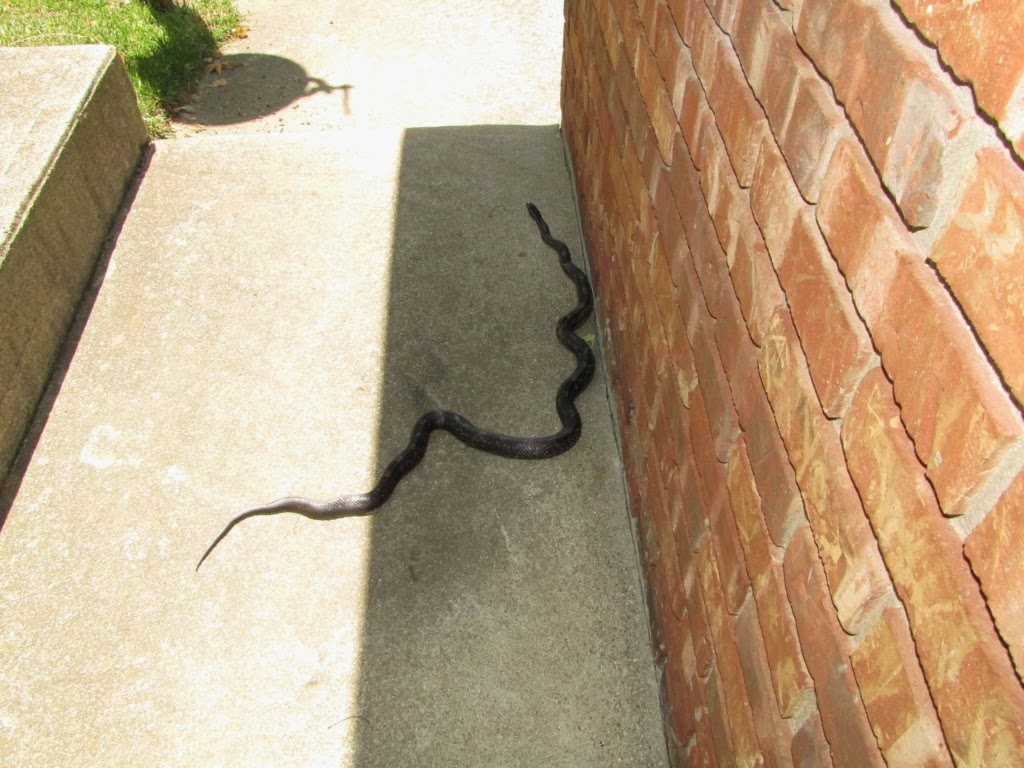 Doesn't look like much? Well, when he extended himself against the front wall of the garage I was able to measure the spot (well after he was gone) and it was just shy of FIVE FEET.
I went back in the house, told Mom she had to come outside and have a look at something. She was freaked out! 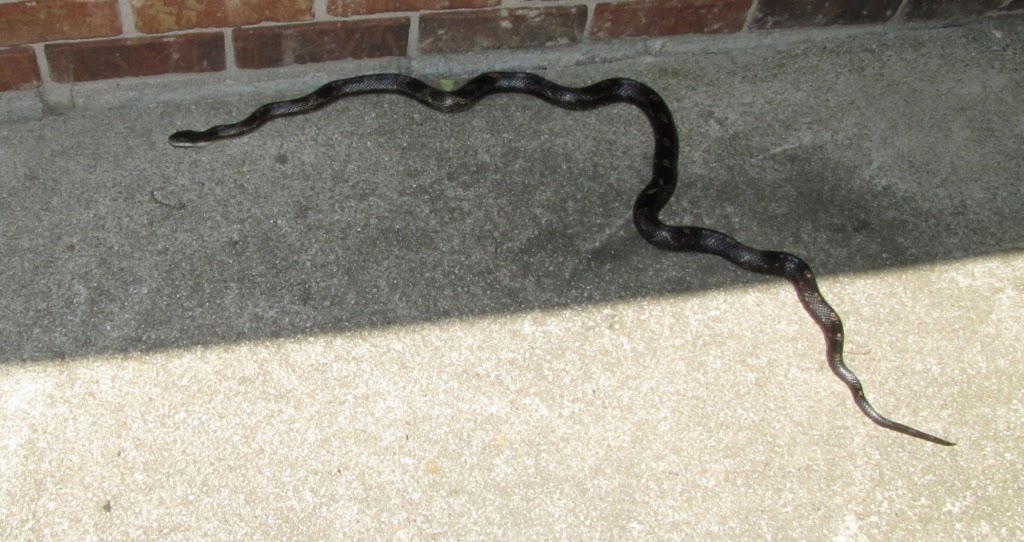 Here's a close-up of his head. The white underbody and pattern makes me think this is a Black Rat Snake and not a Black Racer. As far as snakes go, he was quite handsome. His black tongue tasted the air constantly. 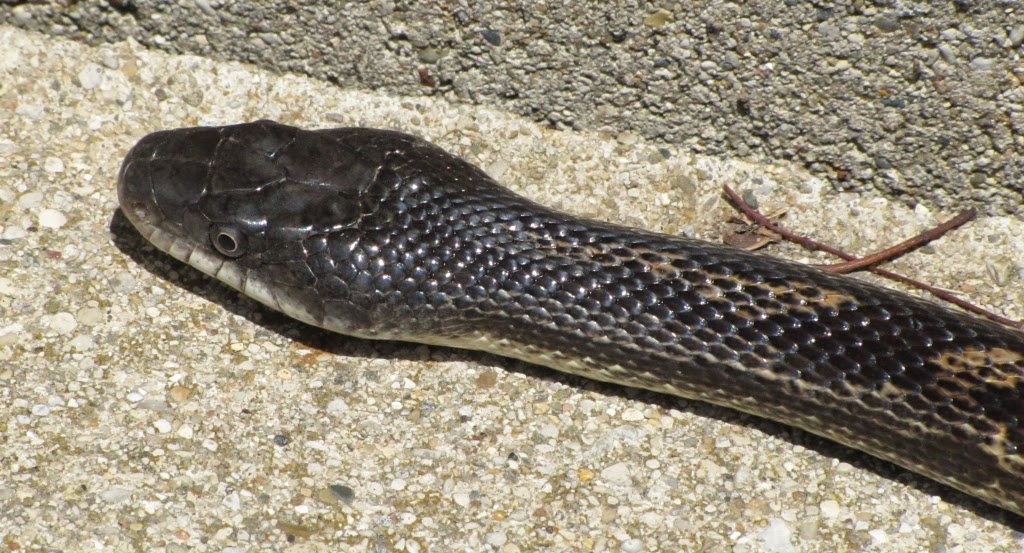 Here's another wider view with a better look at the pattern on his body.
From the east side of the garage, he began working his way around to the south. Mom yelled for me to put the garage door down so he couldn't get in. "I'll never get in the car again if he's in the garage," she said.
Where did he go? Into the garage.
He found a small opening where the rubber rain seal for the garage door meets the concrete flood. I ran around to the walk-in door and saw him curled up on the floor.
So how to get him out of the garage (without hurting him), making sure he doesn't go back inside a wall and make it his permanent home? 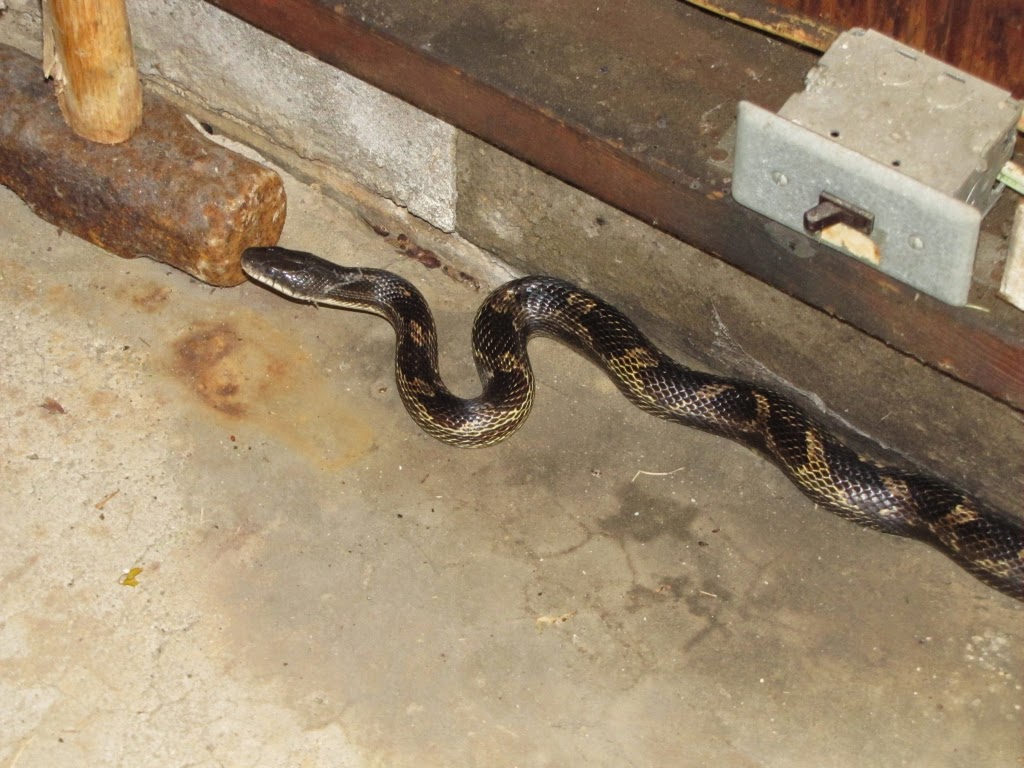 I grabbed a garden hoe-like device (but with three tines) and used it as a scoop, lifting him off the floor, bent in half and dangling comically from the end of the tool. He fell off a few times but I finally managed a balanced load and ran with him for the corn field behind our property. I unloaded him there and he slithered off at an impressive speed (which would make me think he was a Black Racer). Mom said she would love to have a video of me running across the back yard with the snake on the end of a stick. Thankfully there is none.
I went back a short while later and there was no trace of him.
I will remember him for some time. I suspect he will remember me, too.

Update: I went out to have a walk at 4 pm and the snake is BACK! As in on our porch! The field where I carried it is at least 150' from the house. I went out and walked anyway. Later Mom watched the snake crawl across the porch and round the garage, just like the one earlier. Surely it was the same snake? Or was it the other's mate?