I was asking Tom what sweet he wanted this week and he said "cookies are always good".

That's when he told me his step-mother, Clara, made incredible oatmeal-chocolate chip cookies. I found a recipe that adds raisins (click here) and decided to try it. Quite good ... and easy, too.

I post these recipe links mostly so that I can go back in the future and make baked goods again without having to keep track of where I put the recipe. 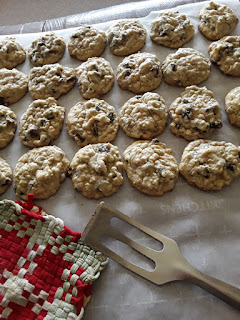 The batter for this cookie is stiffer than most. I almost figured I had forgotten to add something. But the recipe is perfect as is. It made 46 cookies of the size shown. 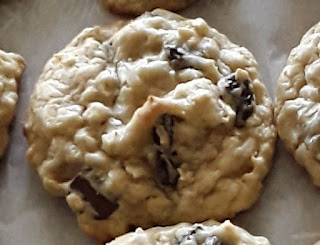 I almost never follow directions. I just melted the butter in a bowl and began adding the ingredients. I saved the flour, oatmeal and chocolate morsels for last (the liquid ingredients mix better that way).

I always use a small ice cream scoop to place the batter on a cookie sheet. I just adjust the amount I scoop to make larger or smaller cookies.

I've had friends tell me that this would be a good recipe to substitute butterscotch morsels for the chocolate ones. 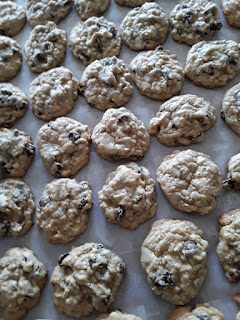 Fresh blueberries are on sale right now and Tom has been taking advantage of it. Two weekends ago he arrived with two containers. Last Saturday he brought another. I've been topping waffles and French toast with blueberries - not to mention a simple bowl of Cheerios - but I wanted to use up the oldest and also have something different.

Fresh blueberry muffins fit the bill! And a recipe for Easy Blueberry Muffins on allrecipes.com looked like the perfect recipe. 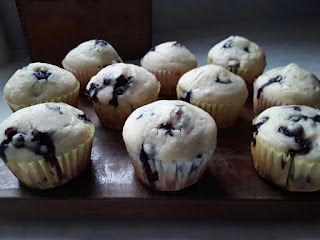 Tom likes to watch his intake of salt and this recipe uses none. For myself, I'd prefer salt (though the butter you slather on will likely contain some). How much? I'd guess half a teaspoon but I haven't tested this. Next time, though, I will.

Also, you're warned that "the secret is in NOT mixing the batter too much". I think that warning is because the blueberries will break up and you'll have a purple batter. I mixed everything but the blueberries into the batter, mixed it very well, and then added the fresh blueberries and just turned them in gently. 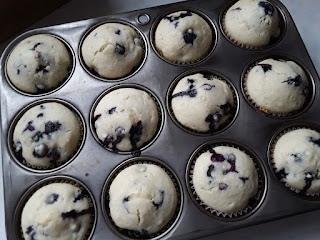 The muffins come out of the oven with the visible blueberries thoroughly cooked and burst open by the heat. It's really a lovely look to the top of each muffin. Why buy blueberry muffin mixes in the store? They surely cost more and the "blueberries" are often artificial and not nearly as good as the real thing. 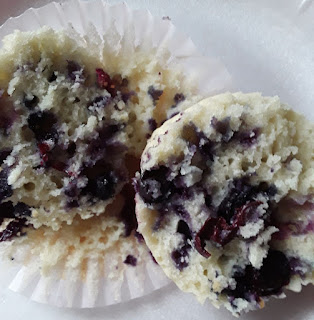 I used more than the 1/2 cup of blueberries (more like 3/4 cup) and the muffins are chock full of fruit. 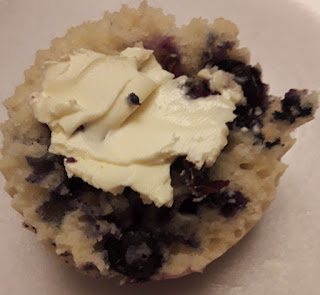 The only thing you need to add is butter. I ate two while they were warm. Testing is such a necessary part of baking.

Each year Tom and I consider attending My Furry Valentine, Cincinnati's largest animal adoption event. This year we had to go to Cincinnati anyway and made it a point to stop by. 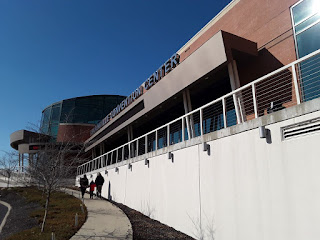 It's held at the Sharonville Convention Center. We got there soon after it opened (at noon) and found parking to be at a premium. We had to park across the street and walk to the event. 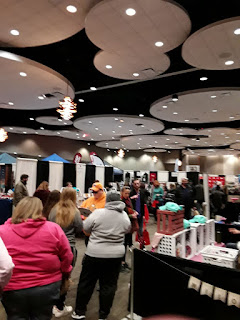 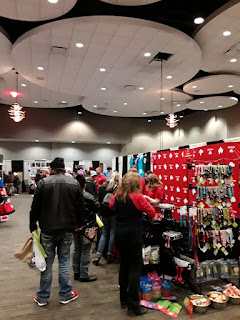 Already at noon, the rooms were packed. 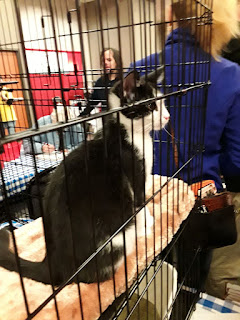 First up, cats! Lots of cats in cages. In fact there were over a thousand animals up for adoption ... mostly cats and dogs but we saw one rabbit, too. 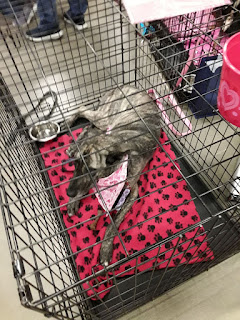 Retired greyhound racing dogs were available. I'm not sure of this was one but it was certainly lanky enough to have been one. Dogs and cats would be taken from cages so prospective adopters could interact with them and determine how close a  fit they made. 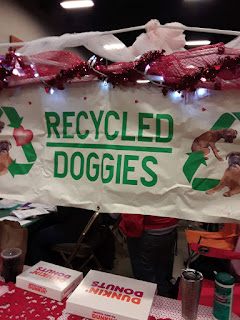 I really liked the name of this agency. Recycled Doggies is based in Cincinnati. Apparently you got a donut for stopping by. 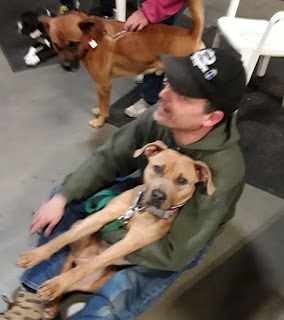 This sweet dog was being held by a prospective adopter (or so I assume). He seemed to be in doggie heaven. He was leaned back against the man's chest and watching people pass by. He was so relaxed he seemed almost to be falling to sleep. I hope he found a home. 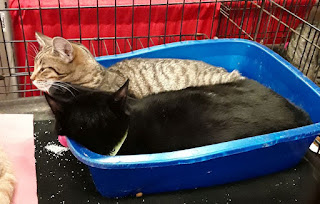 Cats apparently will sleep anywhere, even in their litter pan. 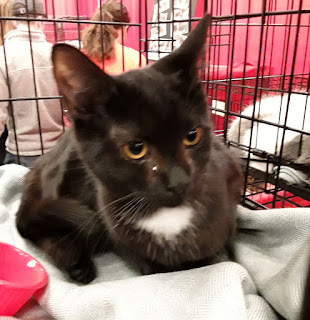 This was Mickey, probably named for his black and white coloration, mimicking the Disney mouse. But a cat named for a mouse? Tom would have brought this one home (he already has two). I'm allergic to cats ... and many dogs, too ... so the suggestion was eventually dropped. 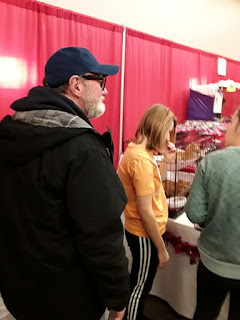 Tom could have spent the day there. He seems happiest when he's interacting with cats ... or books.
Occasionally they'd announce an adopted count on the public address system. I heard 135 as the number at about 1 pm. Many of the cages had tags marked "Adopted". 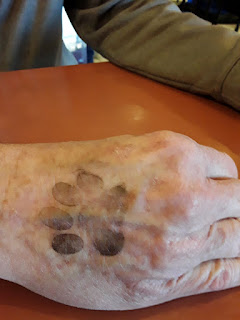 When we paid our $5 admission fee we had our hands stamped with a paw print.

It was really a lovely day and time well spent. I'd recommend anyone interested in a pet attend next year's event. Check out their website at the top of this blog and just remember that it's held near Valentine's Day.

For the past couple of years we've forced hyacinths so we could enjoy their flower and fragrance in winter. All it takes is a forcing glass, fresh hyacinth bulbs, water and a little time.

Tom bought two bags of nice bulbs last fall ... one white, one purple. I've held them on the enclosed porch and started them at the beginning of January. It's interesting to note that white hyacinths force much more quickly. I've done two batches and each followed the exact same timeline.

The bulbs were purchased from A.J. Rahn Greenhouses in Cincinnati. Or so Tom seems to remember.

Here's a photo blog of their progress: 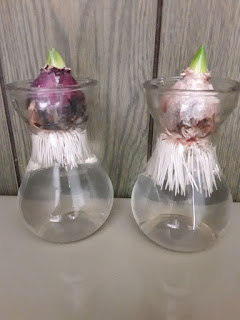 I always start the bulbs on the second floor toilet tank. It's cool and usually somewhat dark. Tap water must be added to the forcing vase whenever it drops below the base of the bulb. 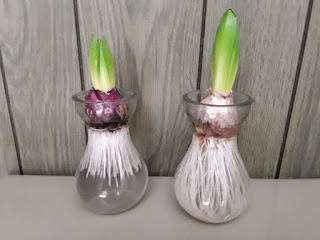 Only two weeks have passed from bag to substantial green tops. The purple one (l) is decidedly slower than the white. 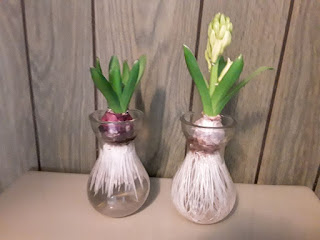 Just three weeks after starting the white hyacinth it's beginning to open its flower. Even in these early stages, the scent is intoxicating. 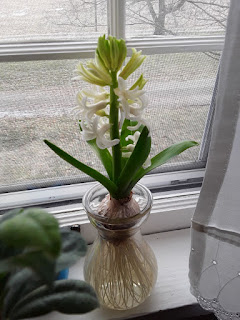 Now that the flower has begun to bloom I've moved the bulb from the toilet to a south-facing windowsill. That will speed up the blooming. 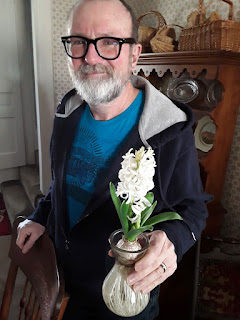 The low temperature outside has been 07° and -6° but we have springtime inside Pinehaven. Here Tom holds the fully open bloom. The bulb has taken but 25 days to get to this stage. 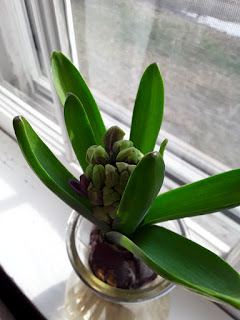 I've moved the purple bulb to the warm windowsill in hopes of speeding its progress. The flower is just now getting ready to open.

Another five days and the purple is coming into full bloom ... 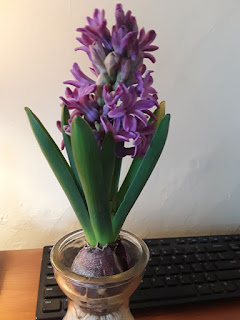