We've been watching the forecast develop the past few days, eventually offering up to 8" of snow. That's exactly what we got. Here's the snow event as it unfolded ... 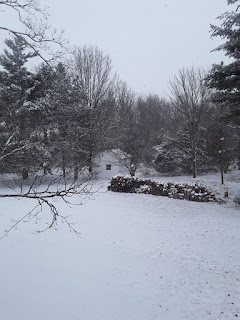 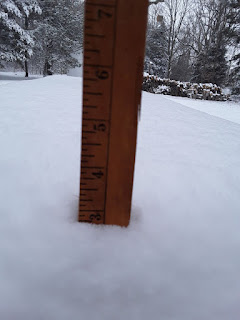 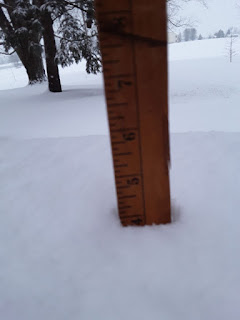 But 4" on our concrete bench. 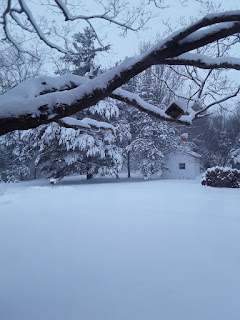 Throughout the evening some heavy bands of snow set up across the Dayton area. Overnight snow continued to fall. This morning there was an even 8" where I measured in the grass near my rain gauge. 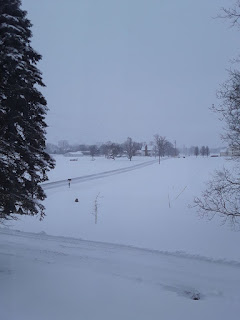 A view out my bedroom window looking south shows that our lane was plowed out by DR Coffman  even before there was any light. Clayton Road has been plowed a number of times but remains snow-covered. I have seen little traffic this morning. This snow has brought the area to a standstill. Montgomery County (and several other nearby counties) are on a Level One Snow Emergency. Most people appear to be staying inside. 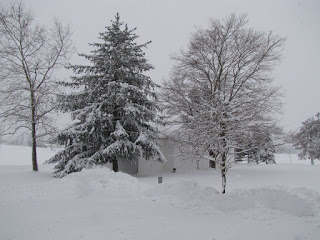 Here's some views about the property. See my rain gauge centered in this shot? It's behind deep snow that the plow has deposited. How happy I was to see Coffman plow me out. At least Tom will be able to get as far as the road. 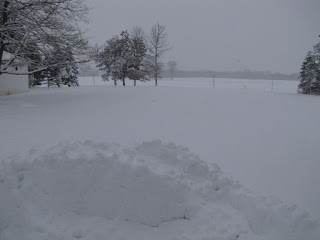 The back yard is adrift in deep snow. It is a dark, gray day but it is not particularly cold: in the mid to upper 20's. It is blessedly calm so there is no drifting and the risk to power lines is minimal. 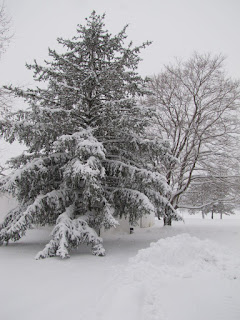 But the pine nearest the driveway looks dangerously weighted down with snow. Yesterday when I shoveled, I found a very wet snow that was incredibly heavy. 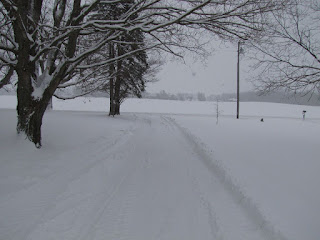 Our driveway is open, at least. No mail today (it is Sunday) and an appointment we had with DirecTV was cancelled. The service technician said he was in a ditch and needed a tow truck. Last I heard he said they were estimating another three hours before he could be pulled out. I suppose I didn't need him dragging snow in the house anyway. 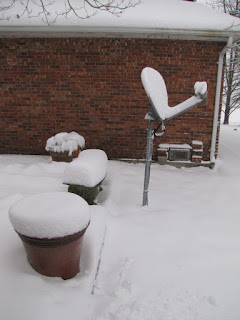 Speaking of DirecTV, the satellite dish is plastered with snow and is probably not operational. I'll have to dig a path to it and brush it off with a broom. At least it's on the ground and accessible. I see so many dishes mounted on rooftops. Why? Getting twenty feet closer to the satellite doesn't make any difference. 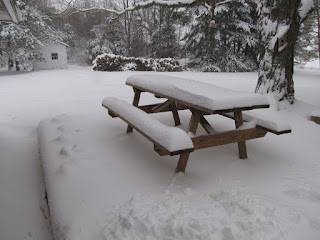 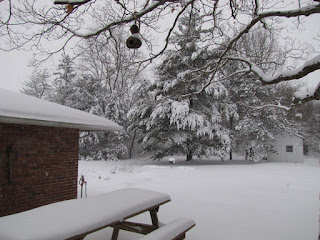 A view towards the garden ... 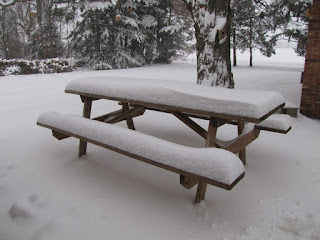 Another closer look at the picnic table.

So, today will be a day I don't venture from the house. Tom's going to return to Cincinnati since he has to work. But I'll be marooned until the snow begins to melt. There are worse things to be.

The power went out again. And it stayed out. 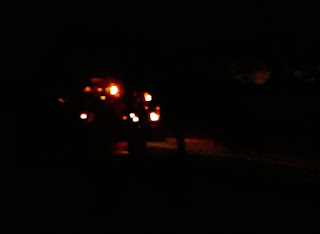 In the dark I heard traffic approaching. One truck seemed to be avoiding something in the road. A car was coming from the opposite direction and turned around. The fields were muddy from the day's rain and not to be traveled on with anything less than a truck.

All I could see was various lights parked beside the road. A police car approached with flashing blue lights. A fire department vehicle arrived with flashing red. Soon a bulldozer arrived and I could hear them working north of me. It became clear that a tree - else a large branch - had fallen onto the road. It's just good that no one was beneath it.

It wasn't until about 3 am that DP&L arrived (picture above). I watched a man walk along the power lines with a bright light. He examined every transformer (even driving south of me). Eventually the bucket truck positioned itself north of the house. I heard a chain saw a couple of times.

Power was restored about 4:45 am. We were out over seven hours.

My main concern was the basement. The sump requires power. I got up every half an hour to check it but the water level never rose enough to cause any problems. Still, the furnace, well pump and water heater sit on the basement floor and would be damaged by deep water.

I got up at 7 am to check the rain gauge and send my daily report: 1.17". We had high winds through the early night. Dayton recorded a 46 mph gust about 11 pm. I suppose a gust in the neighborhood of 50 mph is what brought the tree down. Though the temperature fell from 60° to the 40's, it wasn't a typical winter night so there at least was no risk of the pipes freezing. Even so, the house cooled to 59° by the time the power was restored.

I slept a couple of more hours and then went out to see what had happened ... 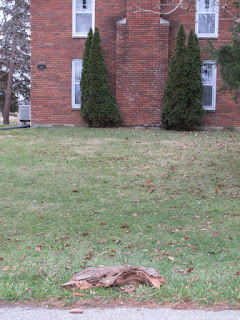 This "log" was lying in front of the house. The tree that fell is well north of Pinehaven and probably just beyond the property line. 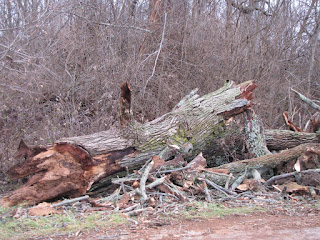 This is apparently what the bulldozer moved off the road. It's an enormous piece of wood. The weight would surely be measured in tons. 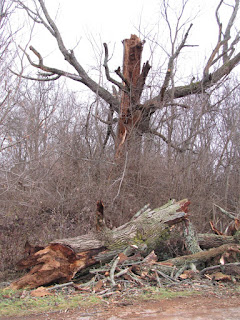 The tree it came from is in the background. The main upright trunk is snapped off. The winds came from the west, directly behind this picture. 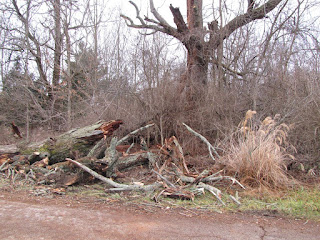 The pampas grass I planted many years ago looks barely missed. That's quite a pile of lumber. 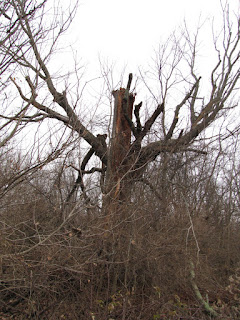 The tree is naturally "topped". The rest will fall soon. But the rest, at least, is well away from the road and won't pose a danger to either traffic or the power lines.

So, my New Year's Eve resulted in just four hours sleep. No revelry here. Just the fear of howling winds and the damage they will do. 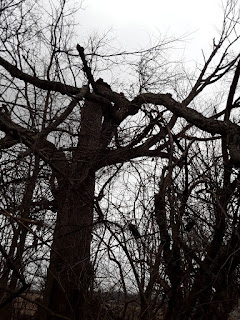 From the west side, another branch is hung up overhead. But it'll offer no danger since it is entirely above the meadow and far from the road. I'll have to watch any time I'm beneath it, though. I suspect it will fall on its own accord the next time the wind blows. 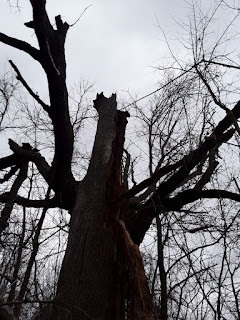 And from the east side, the tree can be seen to be rotten within. The wood is reddish and mottled and a large woodpecker hole stands open on the trunk. I wonder if he was in the cavity when the tree snapped and fell? Surely that would be a rude awakening, to find your whole roof gone and no more than the angry sky above your head.

In any case, the tree is now "safe". There is nothing left to fall on the road and it will do no harm where it stands. I remember how stately and massive this tree was 32 years ago. I've lived to see its end.