We've enjoyed the end of each day for the beautiful sunsets we've been treated to. Here are some memorable ones of the past few months ... 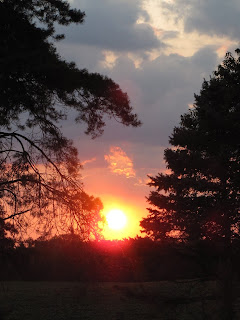 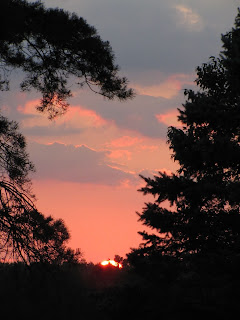 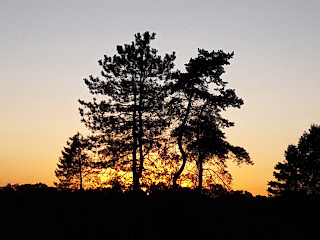 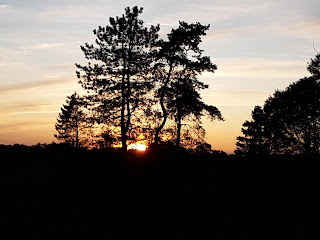 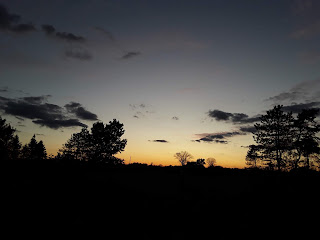 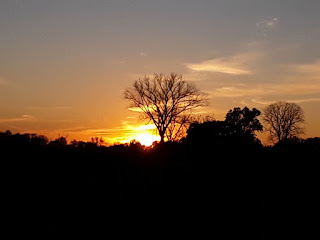 Beautiful end to the days ...

We are all aware [quote] 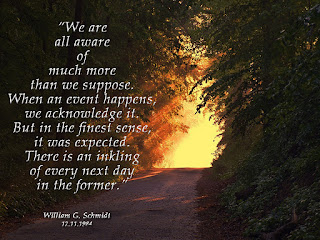 Teacup vs. The Pines

Tom, Teacup and I were enjoying a Saturday afternoon on the porch, sitting beneath the maple and enjoying the sunny, cool weather. Teacup was half asleep beside the concrete bench. That's when I heard a light chatter overhead and saw one of our small squirrels take a seat on a knot.

I nodded to Tom and we watched as he munched maple seeds. He'd gather a few and then sit and enjoy the meal. The squirrel, after all, was doing the same as we. 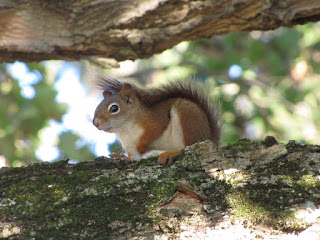 These tiny pine squirrels (Tamiasciurus) share this plot with us year-round. I often hear them scampering across the roof, else in the rain gutters gathering seeds. I see them, too, drinking HVAC condensate as it drips onto the roof from the second floor unit. They're forever scurrying about. They stop to eat and sleep ... and that's about it.

About this time I looked back to Teacup and saw that she had locked onto the critter, too. She was fairly shaking with anticipation of a run. 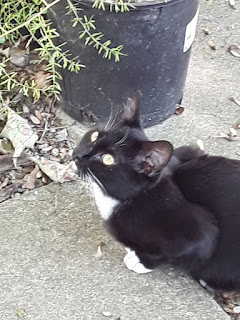 The  squirrel was not about to abandon his spot. Teacup anticipated a race. 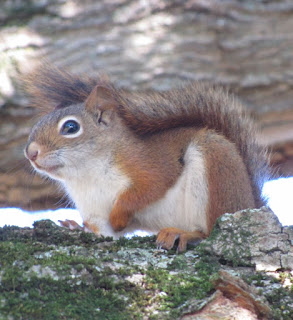 But it quickly became a staring contest. Teacup froze in place; so, too, did the squirrel. 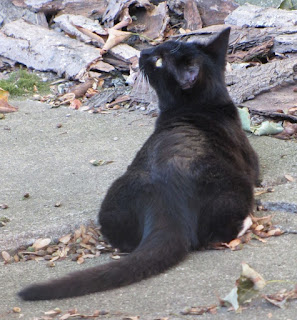 Teacup's genes hearken back to her lion ancestors. The thrill of the hunt coursed through her small body. She'd crouch down, seemingly hidden. But the squirrel seemed to mock her mighty threat. 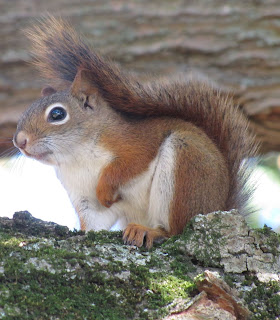 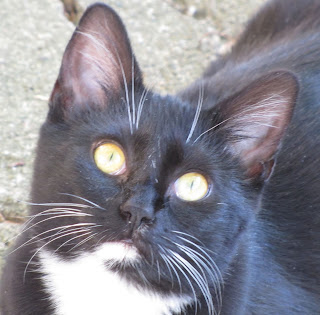 If staring could bring him down, Teacup would win ... 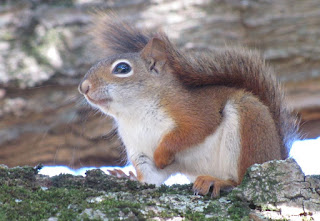 The pine remained motionless, too.

Eventually the squirrel made a quick foray onto the porch and Teacup exploded into action. But she was no match for the squirrel - or quick climbing ability - of the tiny animal. It flew back up the tree and chattered incessantly. "Do you really think you had a chance?" he seemed to laugh. 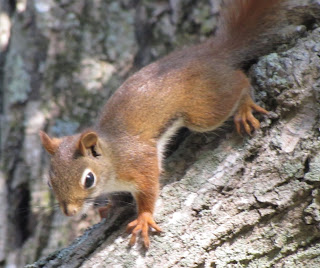 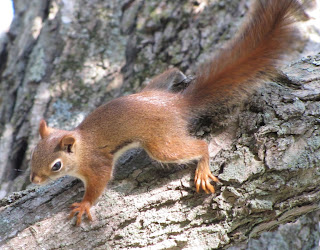 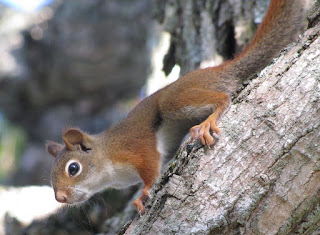 Slowly both tired of the game. There were seeds awaiting and Teacup's nap had been interrupted. Both went back to their tasks.

Tom and I sat in our chairs and watched the contest fade.

We've been talking about our pumpkins all season. More about that in a moment. First, here's the result with our best pumpkin (of eighth) placed on our south brick steps as seasonal decoration. 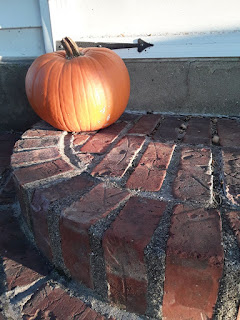 But the season began as one of mystery. What was growing there? Last year we had a Jack 'O Lantern and after Tom carved it I saved seeds for this year. Trouble is, I thought I had mislabeled the envelopes and perhaps it was a zucchini that had  sprouted.

We dug a new garden plot this year, just for gourds. I planted zucchini on purpose but I didn't want the whole area to be "nothing but". So when I first spotted this, it was a 'what-is-it' moment ... 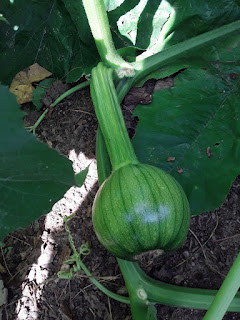 I shared this picture asking if anyone knew what we were growing. Could it be some birdhouse gourd? Maybe a watermelon? One suggested it was a round zucchini (which I have never heard of). Others said the seed I saved, from a grocery store pumpkin and likely a hybrid, was liable to produce anything under the sun. We fondly named it our Frankenmelon. 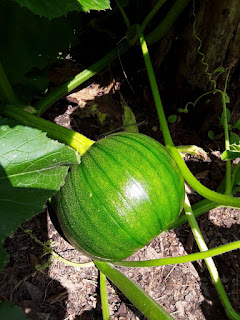 The melon, unconcerned with what we were calling it, simply grew. The summer sun was ample and I'd drag a hose to the new garden plot regularly and soak the soil. The first hint of pumpkin came in early August as an orange blush began to spread across the gourd. The sides, too, began to indent into punkenish stripes. It became apparent that I hadn't mislabeled the seeds after all. 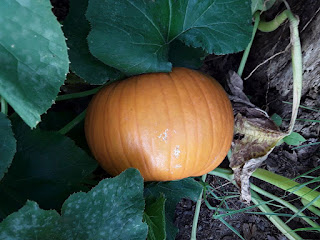 Soon its true personality began to show. As the orange shade began to deepen, the true character of this gourd was revealed day by day. 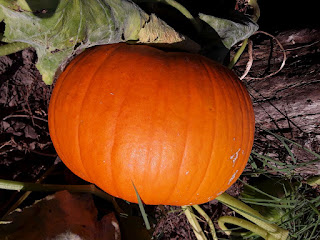 And then it was ripe, just one full month after I first spotted the fruit. Last weekend (09/27) we picked several of the pumpkins to give away. This, the largest, we kept and placed it on our steps.
Pumpkin pie would be good but it is too easy with canned pumpkin. And, I understand that there are special "pie pumpkins" grown especially for that purpose. So this one will serve its purpose as decoration for Halloween. At least we didn't have to lay a round zucchini on our steps.

I should have read my own blog because it would have told me I last had the septic pumped just five years ago. All I could remember is when I had it pumped in 2011. Oddly, that was on the same date as today.

Tom and I dug down to the clean-out last Friday ... 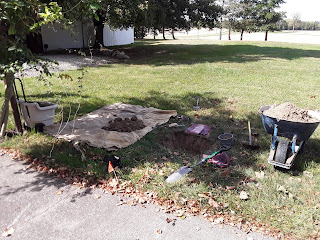 And we uncovered the concrete lid exactly a foot underground ... 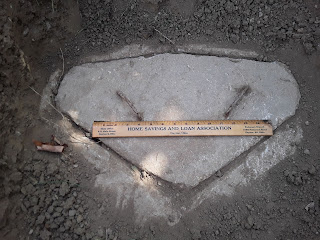 For future reference, it's 72" south of the wooden edge of the flower bed nearest the garage and then 58" due west from that point. This view is from the west (the long direction of the lid is north-south).

Chuck Lee is no longer in business so I opted for Affordable Septic (937-475-9330) who Bob used in the past few years. Tim called last week and said he was  having truck trouble but that he'd be here "early next week". He called late yesterday and was here at 9:15 am this morning to begin work. 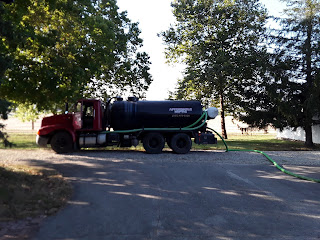 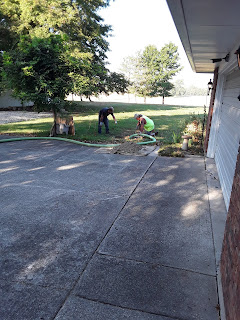 He said the 1500 gallon tank wasn't really in need of pumping but as I had forgotten the date of the last service call, I told him to go ahead. He said with just two living here, I could handle a ten year cycle. It depends mostly on water usage (toilet flushing, laundry, dishes, the length and frequency of showers and baths) and chemical usage (they kill necessary bacteria in the leach beds and shorten the time). 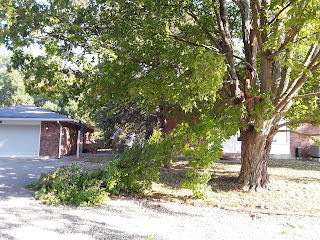 As he left, the truck snapped two limbs from the maple tree. They always hung too low so I'm happy to be rid of them. Only now I have to get out a ladder and a chain saw, make clean cuts and take them down.