Though the beautiful diary, penned in 1843 clearly shows Miss Sallie L. Skinner on the title page, I believe it was actually written by Christopher Harrison and presented to Skinner as a gift. Before January begins, this is written:

That, and the content, leads me to believe that Harrison is the author. But who is Christopher Harrison? He was Indiana's first Lieutenant Governor (1816-1819). The diary, however, was written at Talbot Co. Maryland (at "Fair View"). Harrison was an artist in his own rite and the diary displays his skills in that area. Clearly the man was a poet, too. He looks, perhaps, something of a sea captain. 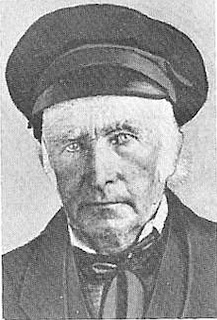 The diary is predominantly a weather record. Harrison regularly recorded the highs and lows and numerous meteorological phenomenon. He even recorded his height (5'9") and weight (161 pounds) on January 18. He recorded others on the plantation, too, including Skinner (5'2-1/2" and 109 pounds). Harrison turned 68 in 1842; Skinner was 21.

Here's the title page of the diary, almost a fraktur: 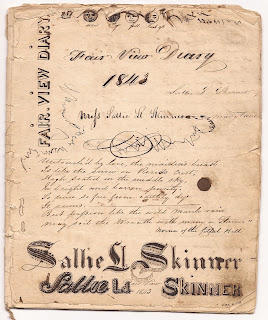 The poem on this cover piece is by Sir Walter Scott (Norna). These other examples, I think, were actually written by Harrison:

December clouds and Storms are past,
Our last year's cares are o'er at last
With smiling faces New Year appears
To cheer our hopes, dispel our fear.
Now ladies shall have lovers plenty,
Rich and brave and five and twenty,
Young men shall strive fine clothes to wear,
More than their parents can well spare,
The Sage, the Rich, the old, the poor,
Shall all this year expect much more.
And yet they'll find perhaps at last,
This year no better than the past.
But who neither hope nor fear
Find little change in any year.
CH Jany 1, 1843
At the end of January Harrison penned these lines:

Such never was such weather seen
In Winter, as this month has been,
So right the sun, so mild the air,
You'd almost think that Spring was here.

I love these lines in February:

A Valentine's a paper present
To our beloved; by it is meant,
That love inflames the sender's breast,
Before conceal'd, but now confess'd.

Well this is Spring, all cold and wet,
Shiv'ring she comes along, and yet,
She has a smile upon her face,
A smile that charms the human race.

And later the same month:

Why winter, do you linger here,
and pinch with cold, poor motels so,
do you not know the time of year?
You should have gone ten days ago.

In April, Harrison mellows along with the weather but shows concern for the animals:

The Fields, at last, are growing green,
And Flocks and Herds are grazing seen,
But plain their Ribs and scant their height,
Of goats, poor souls, a piteous sight.

Now lovely Spring she laughs outright,
In gaudy drefs, red, blue and white,
She throws aside her cloak, yet sighs,
For oh, 'midst pleasures soon she dies.

The Harvest o'er, secur'd the grain,
In Barns and Ricks from wind and Rain,
What price for wheat is next the cry
Of ev'ry Farmer low and high.

The beauties of a harvest field
of Golden Wheat all parts praise
But Wheat itself I think must yield
To Indian Corn this Silver maize.

As the year winds down in November:

The labors of the year are over
Feed now your stock with roots and clover
With friends be merry, now's the Season
T' enjoy pastimes but yet in reason

Harrison died on August 29, 1862 and is buried at Fair View, in an unmarked grave I am told. He never married. Skinner lived until October 27, 1894. She married in 1847. Skinner, by the way, is the daughter of Harrison's sister, Elizabeth (Harrison) Skinner.

I bought the diary many years ago and it is one of my most prized possessions. I'm guessing Skinner felt the same way about it.
Posted by Bill at 2:27 PM

I hunt mushrooms every year and this time around I expected the numbers to be great. A warm winter. A mild spring, Plenty of early rain. What more could a morel want?

Obviously something it didn't get. So far this season, I've found one. 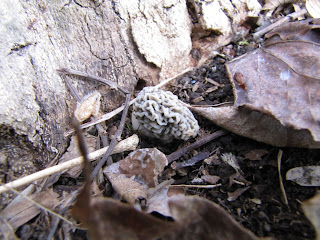 Here's how it looked on 04/01. It's tucked right up against the base of a tree and so it's growing away from the trunk. It looks like it has Peyronie's Disease (don't know what that is? look it up). Just three days later (I didn't pick it, of course) this is how it looked: 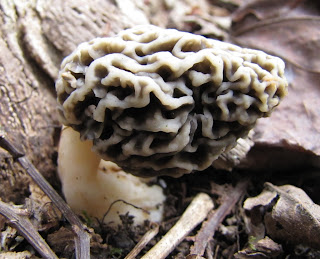 It's a beautiful thing, though small. I love the musky sexual scent, the spongy top. But I left it alone and hope it manages some offspring next year. I went back a week later and the poor thing has spent itself, dried up in situ, its season come and gone in this shady spot in the woods. I might follow its example given half the chance.
Posted by Bill at 12:48 PM

Every now and then, the common takes our breath away.

Late in the day yesterday, I happened to go to the back door, just as the sun was shining through the blossoming maple tree. There have been these dangling blooms for days, cascades of golden strings that shimmer in the breeze and confirm that spring is indeed fully here.

But this view was different than, say, looking out the north window. With the sun behind the cluster of maple blossoms, the gold was burnished and bright, made the more vivid by the backdrop of black shingles on the garage roof. 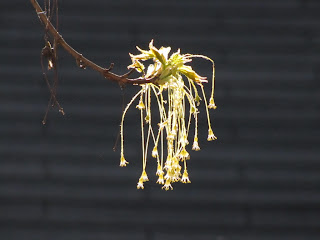 Because my vantage placed me in shadow - the overhang of the roof extended horizontally between myself and the sun - only the golden strands were lit, as though a spotlight had been placed there for me alone.

Could it be photographed? I ran up the steps to my bedroom and pulled the Canon from its bag. I kept the lens in shadow, like my eyes, and shot directly in the direction of the sun, something uncommonly done. The photo does the scene justice.

Against the striation of the onyx shingles, the cluster seems as living as it is. These are nature's golden bangles, stunning earrings hung from woody lobes. No jeweler could make decoration half so brilliant. This gold is living leaf.
Posted by Bill at 9:15 AM 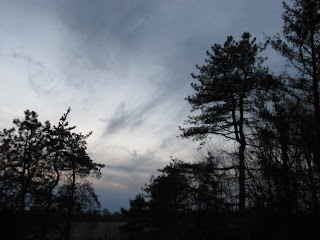 It was a muted sunset on 04/07. I stood at the back of the property waiting for the sky to fire all red and orange and there wasn't a hint of anything but shades of gray. And yet this suddenly cool weather still produced a beautiful, if muted, sunset.

I took a number of shots and the sky, from the southwest to northwest exhibited this same quiet dove-gray shades. The chill in the air soon drove me back inside. I would have to wait another day for the sky to ignite.

The trees, probably half a mile distant, were silhouetted against the setting sun. The sky seemed molten gold. 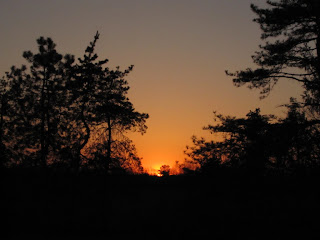 And when at last the sun was nearly gone, the pines darkened by degrees as the sun's fire was extinguished.  The sky again took on a general gray cast. Only where the sun had set did the sky remain fiery for some more minutes.