Late in October I called Rob's Restaurant in Brookville to make reservations for Thanksgiving. Already there wasn't much choice. Mom would have preferred 11 am (too early for many of us) but only 12:30 pm was available ... or later times.

Turns out we'll have to call even earlier next year and try for the earlier time. The crowds were excessive and Rob's allowed for walk-in's to cover cancellations. I saw people waiting when we arrived and still waiting almost an hour later when we left. That's a testament to the quality of Rob's food. 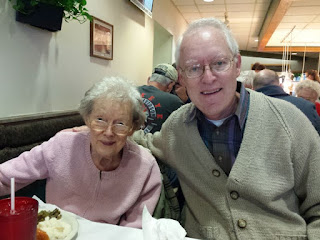 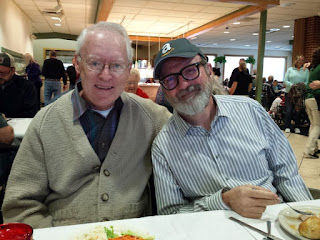 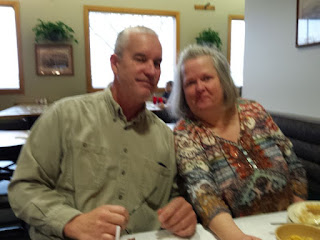 After we ate, we came home and played cards (Michigan Rummy). No one was interested in eating more. Tom, Bob and I had a couple of glasses of Listermann beer in their new Chickow! flavor.  Very interesting a very potent! Tom picked up a growler yesterday and also brought Mom four bottles of Nutcase, her favorite. 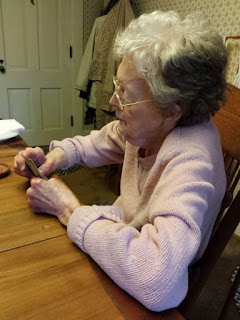 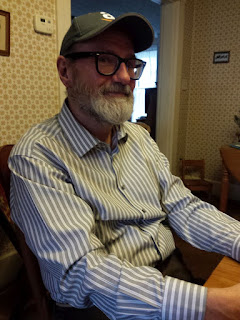 Tom's waiting for his turn 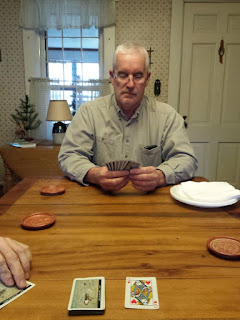 Bob's checking out his hard 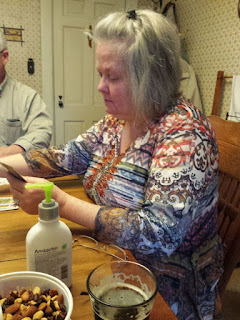 Nancy is a ruthless player. She's there to win!

In the foreground is my glass of Chickow! beer. It's dark - even bitter - and very strong. Listermann makes it in two flavors: Coconut and Cinnamon Roll. I have no idea which flavor we had as it was very subtle. We also had a bowl of mixed nuts with dried cherries but no one was very hungry. Mom suggested popcorn but that was vetoes. We were all stuffed.
A great day with family. It was  50° early in the day, dropping into the lower 40's as the afternoon progressed. It was also a cloudy, dark and dismal day. But with a group like this, who cared?

You'd think I was baking bread for Thanksgiving since it's tomorrow. But, no, I'm baking bread because we need it. Plus I love homemade. 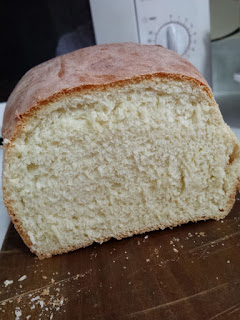 I've been looking through various recipes, both in Mom's cookbooks and online, and I decided to try one from a very old Betty Crocker cookbook called "Perfect White Bread". So the credit for this recipe goes to them. The instructions are mine.


I began by activating the dry yeast in the milk (warmed) and the sugar. I allowed it to proof for about five minutes while I worked with the dry ingredients.
I poured 5-3/4 cups of flower into a large bowl, added the salt and melted margarine. When the yeast was foaming I added the liquid to the flour and stirred it with a large spoon. I then dumped it onto a lightly floured pastry cloth and kneaded it by hand for 10 minutes. The small amount of flour I used to dust the cloth was in addition to what I used in the recipe.
Here's what the dough looks like at this point. 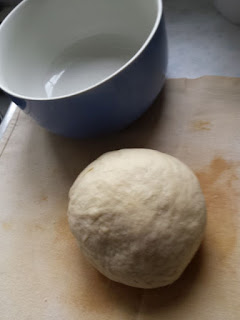 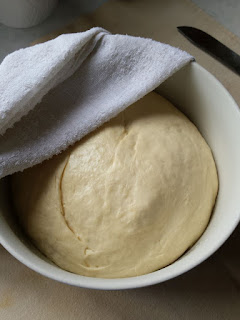 I then placed the dough back in the bowl (washed) which I first rubbed with vegetable oil. I turned the dough once so that both sides were lightly coated with oil. The first rise takes about an hour and, because our kitchen is cold, I turn the oven on and then back off ... just enough to warm it. I let the first rise happen in the oven. I covered the bowl with a damp cloth (shown).
After an hour, the picture above shows how the dough has doubled in size. 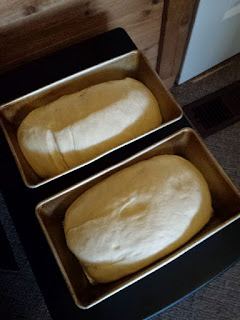 I knock the dough down, knead it again for a few minutes, then divide it in half and form it into two oblong loaves. I've lightly oiled each pan since the dough will be baked in them after rising for another hour.
The picture above is after an hour's rise. Because I'm heating the oven I can't use it for the second rise so I've placed both pans on top of our Eden Pure heater. The top doesn't get warm but the area around the heater (which is on, of course) is much warmer than the rest of the kitchen.
Then, when the dough looks as pictured it goes into a 375° oven for 45 minutes. I add a pan of boiling water to the oven (on a rack beneath the bread) to keep the crust soft while it further rises. 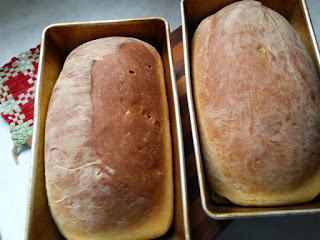 Time's up. Here's how the loaves look right out of the oven ... hot and yeasty good. 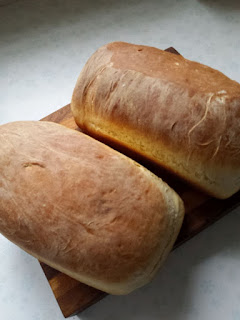 After a few minutes I knocked both loaves out of their pans to cool. Since the pan was oiled, the loaves fall right out. 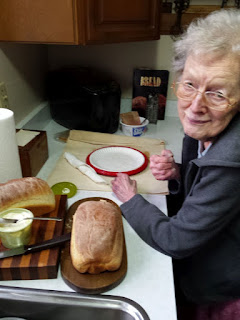 Whenever we're shopping at Meijer's, Mom heads straight for the bakery to see if they have focaccia bread. A few months ago they told us it was discontinued but recently we've been able to find it again. She prefers a focaccia with herbs and cheese on the top.

I decided I would try to make it. I couldn't find the recipe Meijer's uses but I found a basic focaccia recipe that I thought could be easily modified. This Easiest Focaccia Recipe was my jumping off point.

I have to admit that what sparked my interest this week was a program I watched on PBS's "Create" channel. Lidia Bastianich is certainly one of my favorite TV chefs and I usually lust after her easy Italian recipes. So I also made use of the techniques Lidia showed, though not her recipe.

A few hours later I took a lovely pan of a herb focaccia out of the oven that exceeded my wildest hopes. "That's the best thing you ever made," Mom said. 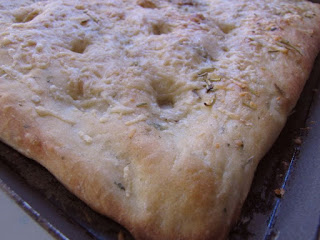 The bread is straightforward and simple but it takes some time due to two rises of the dough. There are only six ingredients (plus herbs and cheese):

The yeast is proofed by adding it to the 1/3 cup of warm water into which a teaspoon of white sugar has been dissolved. Set it aside and in 5-10 minutes it should be foaming. At that point it's ready to add to the dry ingredients. 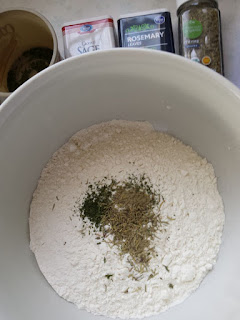 In a large bowl combine the yeast mixture with herbs. I used 1/2 teaspoon each of parsley (home-grown), sage and thyme. I used a whole teaspoon of rosemary and this is a traditional focacchia ingredient and one of Mom's favorites.
Add additional water gradually until the dough is workable but still a bit sticky. 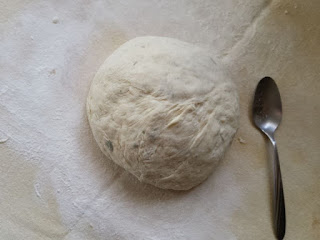 I mixed this with a large spoon and then turned the sticky dough out onto a floured pastry cloth for kneading. After a minute or two of working the dough, it looked like the above picture.
I washed the same bowl I made the dough in, thoroughly oiled it and placed the dough ball into it. I turned the dough over so both sides were liberally covered with oil. [Focaccia bread is often called Olive Oil Bread]
I covered the bowl with a damp cloth and placed it in a warm spot for an hour. 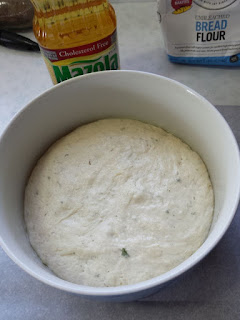 After an hour of rising, this is what the dough looked like. It spread out and doubled in size.
I punched the dough down and kneaded it again and the placed it on an oiled (non-stick) cookie sheet. Our cookie sheet measures 12 x 15.5". 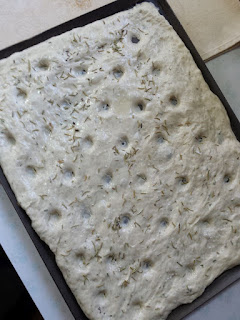 It doesn't seem possible that the dough ball can be worked into such a large size. But I worked the dough into a rectangle while still on the pastry cloth. I merely used my hands and fingers. No rolling pin needed. When I had it about half the needed size, I transferred the rectangle to the cookie sheet and worked it out to its full size.
Note: the cookie sheet needs to be liberally oiled. I used a non-stick pan so the focaccia wouldn't have stuck anyway but the oil is necessary for a true crispy focaccia crust.
If it's a little resistant to stretching that far, give it a few minutes to rest.I just pulled, prodded and pressed it into the full size of the cookie sheet.
Liberally coat the top of the dough with oil. It should shine if you've added enough. Just use your fingers or a pastry brush (I don't have one).
Then, poke holes in the dough with a finger. Some recipes call for the holes to go the whole way through the dough; others suggest just deep dimples. I did a little of both, depending on how thick the dough was. The holes give the focaccia its traditional look and also allow gas to escape while it bakes.
Sprinkle the salt on the top. I used a large crystal "pretzel" salt and just pinched some and distributed it by hand.
Now allow this to rise a second time briefly. It's suggested to cover it with plastic wrap but I didn't. How can it dry out if oiled? I probably waited no more than 15-20 minutes. 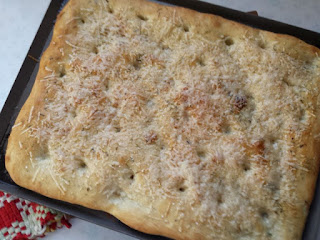 I baked it at 475° for 20 minutes. I turned the pan around half-way through the baking (our oven bakes hotter at the back). Also, about five minutes before it was finished, I took it out and added shredded Parmesan to the top. I might have been able to add this at the start but I was afraid it would burn. In the last five minutes, the Parmesan melted and spread across the top.

The recipe says to bake only 10 minutes for a "moist and fluffy" focaccia, 20 minutes for the more traditional crispy crust. I do not think mine would have been done in ten minutes.

Allow the bread to cool a bit before cutting.