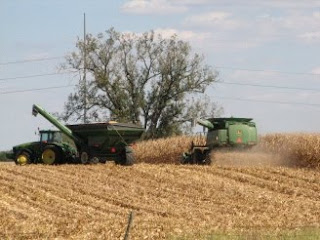 Already the large harvesters are roaming the fields, filling huge bins with the golden harvest. It is early this year, I'd say, and the corn is finished, if not by the season then by the dryness. First, the field north of us was taken out last week. Then, over the weekend, the fields to the east of the pond were harvested. As we walked, this is what we saw (above). 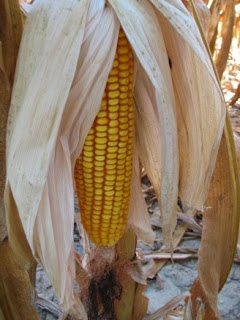 How can it be that a single kernel of corn converts to this in but a few months? Nature's multiplication tables are set and well known. A single kernel, drilled into the ground in May, produces usually a single cob per plant. Each cob contains anywhere from 500 to 1200 kernels (the average is 800). And so the factor is on the order of 200 times per month.
An acre, I am told, brings about 200 bushels, some much more, some less. It's a wonder we can't hear the production, it is so rapid and vast.
I remember writing in Pinehaven that I enjoyed hearing the gentle sounds of corn leaves sliding past one another even on a calm night. Is it any wonder? These plants are industrious!
And so the season closes with a bang. The empty metal bins are dragged noisily to the fields, filled in a tornado of dust and then rattled along the asphalt roadways of Jackson Twp. to the silos. I hear them still gathering in the early night.
When I awaken again, all is quite. Then a new days of agriculture begins. And finally, as they fields lay bare and the air cools, the sounds of silence again descend on Farmersville.
Posted by Bill at 10:38 AM