Over night. I knew the temperature was falling, even lower than predicted. How? The furnace (a heat pump) ran longer than usual. I remember waking up about 2:30 a.m. and I heard the compressor (which is below my south bedroom window) whining away. It seemed that I lay awake for an hour and a half before I heard it cycler off. But Dad says no, it cycled at 3 a.m. I must have fallen asleep for a short while. You can't trust a sleepy brain.
Then, too, sometime during the night I pulled my blanket high and followed it with a throw I keep on my feet. It felt good. I knew it was getting fairly cold (we don't have the second floor furnace turned on at all). When at last the sun rose - about 8 a.m. - I was standing on the north lawn waiting for it. I watched as the orange glow spread across the horizon and then the first rays scatter across the sky. Within mere minutes the sun had risen high enough to cast long shadows across the cold wet grass at my feet. In this shot, the field of cut corn is lit by the early rays ... low, long and orange as hot coals. But it was all a hoax; the air was a chilly freezing. 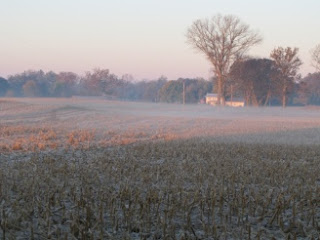 As proof, walk with me to the western edge of our property and gaze upon this corn stubble, white with frost ... frozen! A light fog lays wispy above the corn and is pushed about by the weight of mere sunlight. Not a breath of air is stirring.
And so the first frost - though very light - was recorded on 10/16/10 this year. The date of the average first frost (through 36 years of my own records) was 10/04; it is now pushed later to 10/06 by this later date. Cold weather and frost is late this year. Will that signal lower heating costs this winter?
I marvel at the difference between an eastern gaze and a western one. The one gives a warm glow; the other a cold shoulder. Our view of the world is artificial. It is modified sometimes by merely turning around.
Posted by Bill at 5:23 PM